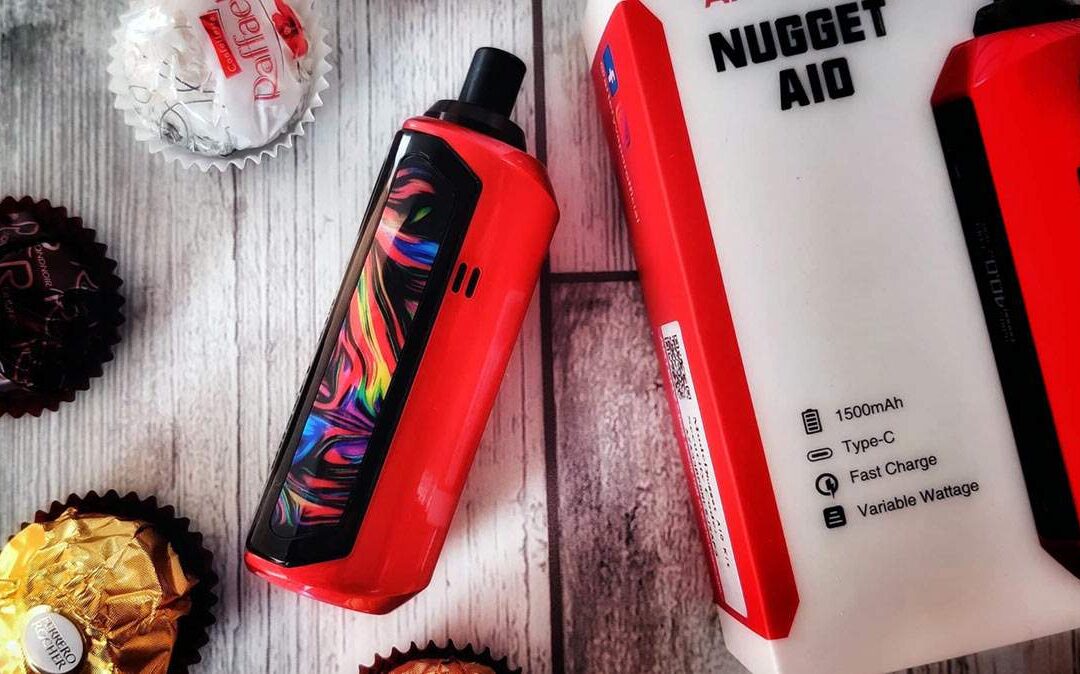 Artery Nugget: an AIO system also with a regenerable base

The Asian manufacturer Artery has recently released the Nugget device, an all-in-one (AIO) system with which the Shenzhen company hopes to repeat the commercial fortunes of the Artery Pal 2 and Pal II Pro. I have already had occasion to remember several times that, given the ever increasing number of entry level kits on the market, it becomes increasingly difficult to come across truly innovative systems that are therefore worthy of attention. Let’s see if the latest creation by Artery house will hold for me.

With the Nugget AIO system the manufacturer proposes an entry-level e-cig with some features able to wink even to a somewhat more advanced user.

So let’s start looking at the contents of the Nugget package. 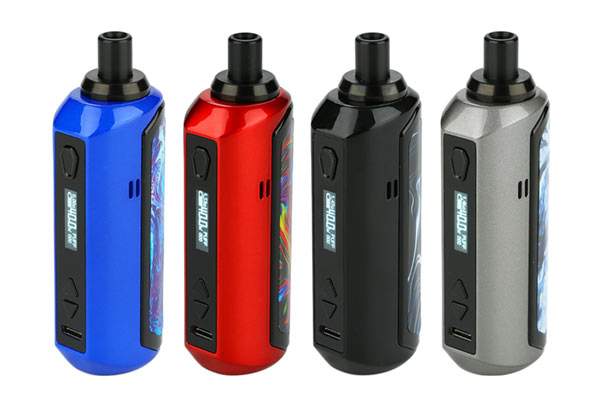 Nugget AIO looks like a classic mini electronic mod and has a similar cylindrical shape (elliptical base). The design is lively, youthful and of sure impact, although I would like to say that the style cannot be defined properly so as neither minimal, but it is still a very pleasant product. The color (red in my case) is shiny and metallic and covers slightly more than half of the body of the mod made of zinc alloy; the remaining part consists of a black plastic panel with lateral workings with a resin-like effect. The build quality, despite the amount of plastic used, is good for an entry level device and also the finishings are very appreciable. On one of the two narrow sides of the box, there is a panel with a fire button, a small and bright display, two function keys and a USB port; on the opposite side is instead placed a large and functional window for the e-liquid control and the product name (engraved). 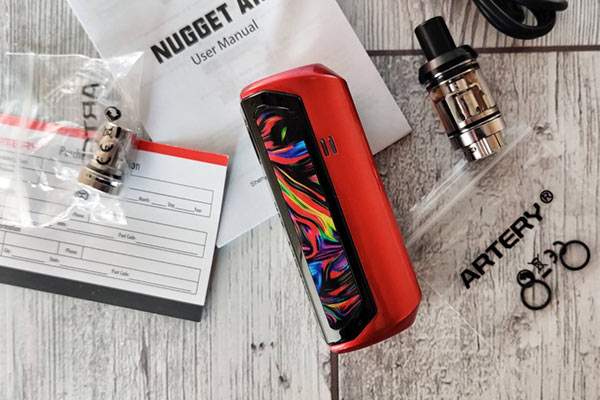 The ergonomics is excellent, the Nugget is easy to hold, it is easy to handle and has an excellent feeling between the hands. Its portability is also good, although it must be said that the mod is not really very light if you consider its compact size.

Regarding the build quality a macroscopic defect is represented by the slight lateral movement of the tank inside its seat. This is not a defect that compromises the correct functioning of the mod, but is rather annoying during the vape.

Nugget AIO measures 84 mm in height, 32 mm in width and 27 mm in thickness for a total weight of 130 gr. The device is equipped with a built-in 1500 mAh battery that could be recharged via a USB type-C cable (1.5 A maximum charge current) in about 1 hour. The Nugget circuit is extremely simplified in its functions, to facilitate as much as possible a novice user; in addition to the classic protection functions (low voltage, no atomizer found, atomizer short circuit and 8 second timeout), the vaper can change the output power (with 0.5 watt steps) and can reset the puff counter (fire button and function keys pressed simultaneously). It is also possible to lock the up & down keys (fire key and “+” key) and also completely lock the mod (pressing the two function keys simultaneously).

It appears quite obvious that the Nugget circuit’s function park is really reduced to the bone and, despite the manufacturer’s intentions, this was done to facilitate use by a beginner consumer, then it is also true that it would have been very useful to include an intelligent coil recognition mode with automatic setting of a maximum power; it is a feature that Artery itself used on the Pal II Pro and that is perfect for beginners. 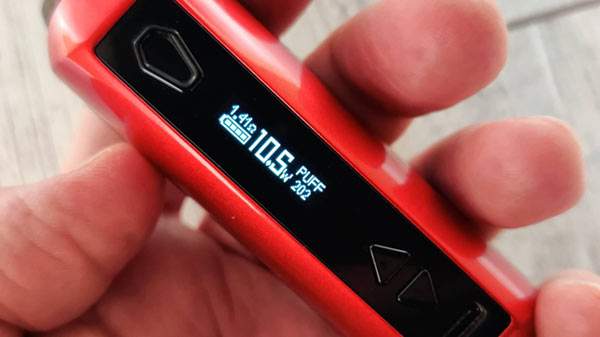 Before going on to observe the tank characteristics, it is good to remember that the device turns on/off with the canonical sequence of five close clicks, while holding down the fire button and the “-” button simultaneously it’s possible to activate/deactivate the mod LED light.

The atomizer of this AIO system has a diameter of about 20mm and can accommodate 2 ml of liquid in the TPD version and 3 ml in the standard version. It is a very essential atomizer composed of a top cap with integrated a black polycarbonate drip tip, a stainless steel body with a glass tank and a stainless steel base with an airflow control ring on which are screwed the supplied head coils. The atom lodges in its compartment by magnetically anchoring; the seal is good even if, as mentioned above, there is a slight and annoying lateral movement of the tank. 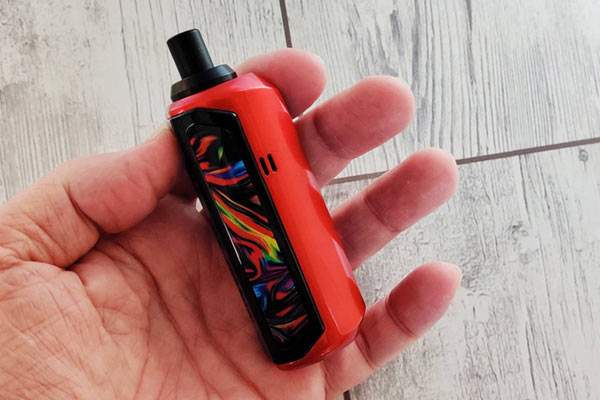 In my opinion, the versatility offered in terms of coil options is the most interesting functional feature for the Nugget kit. Here is the full range of solutions available:

The operation of replacing a coil is extremely easy and quick; after removing the tank from the mod, all you have to do is unscrew the atomizer base and then unscrew the coil from the base. Once a new head coil is inserted inside the tank, you can proceed with the top e-liquid refill, which is also very simple. It is necessary to unscrew the top cap of the atom and insert the e-juice using the wide side slot, suitable for any type of dropper and bottle. 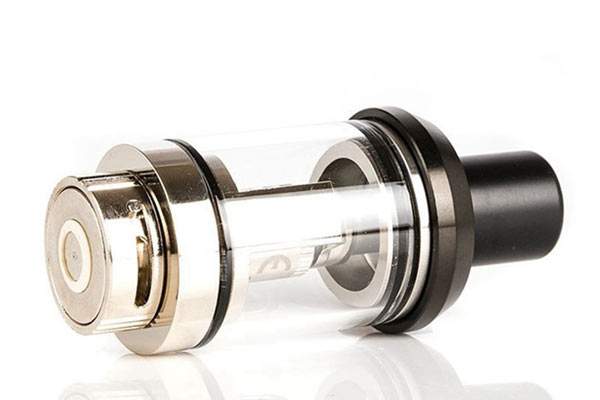 Both the supplied coils and the optional ones that can be purchased separately, as well as the RBA base, guarantee great versatility to the Nugget kit in terms of type of vape; unfortunately, however, the great versatility offered by the Nugget AIO does not correspond to aromatic performances worthy of note.

With the 1.4 ohm head, in addition to having found some problems with the draft of liquids without a minimum percentage of water, I found a product that could not guarantee an aromatic yield up to the situation. In the two or three tests performed, all e-liquids presented a strange and somewhat unnatural plastic aftertaste. 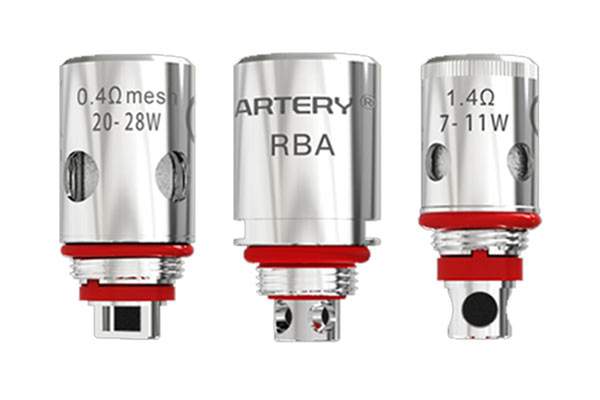 Slightly better, but not enough to be satisfied, is the behavior of the 0.4 ohm coil mesh, which provides the vaper with a slightly more substantial and satisfying vape. But even in this case aromatically not on average with the current market demands. To stay in the Artery house, the performances are certainly lower than those provided by the Pal II Pro, reviewed in the last September.

Unexpectedly positive were the performances achieved using the RBA base, with which I experimented with the creation of an vape archeology coil (Kanthal A1 30 awg on 2mm diameter tip) given the very small dimensions of the deck (10mm of diameter). With the RBA base, the Nugget AIO kit becomes absolutely competitive and guarantees a respectable aromatic yield, I would say certainly satisfactory. I also had the opportunity to test some organic tobacco e-juices and I was not disappointed at all, on the contrary … 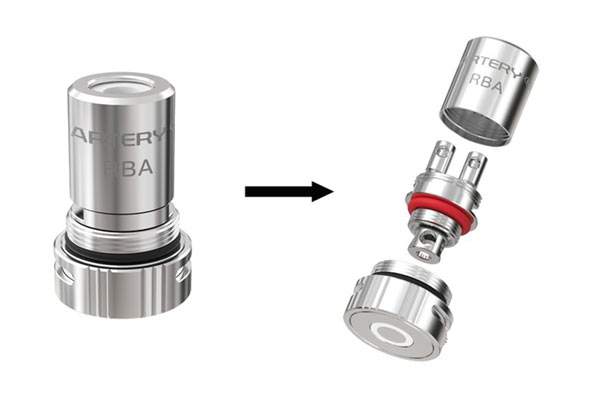 I finish the chapter on the performance of Nugget AIO by referring to two good aspects for this AIO system: the first is that the atomizer does not suffer from the slightest problem of condensate liquid and therefore the tank compartment remains always dry and clean; the second is that the 1500 mAh battery guarantees a good vape autonomy (3-4 tank) if you use it in MTL configuration, then with the 1.4 ohm head coil, with the 1.0 ohm head or with the RBA base and coils not less than 1.2 ohm.

The Nugget AIO kit is an interesting product especially for the possibility of using a RBA base, but pays the duty for the aromatic performances of its standard head coils. I hope the manufacturer will proceed soon with an upgrade of the head coil to guarantee the right aromatic competitiveness to this device.