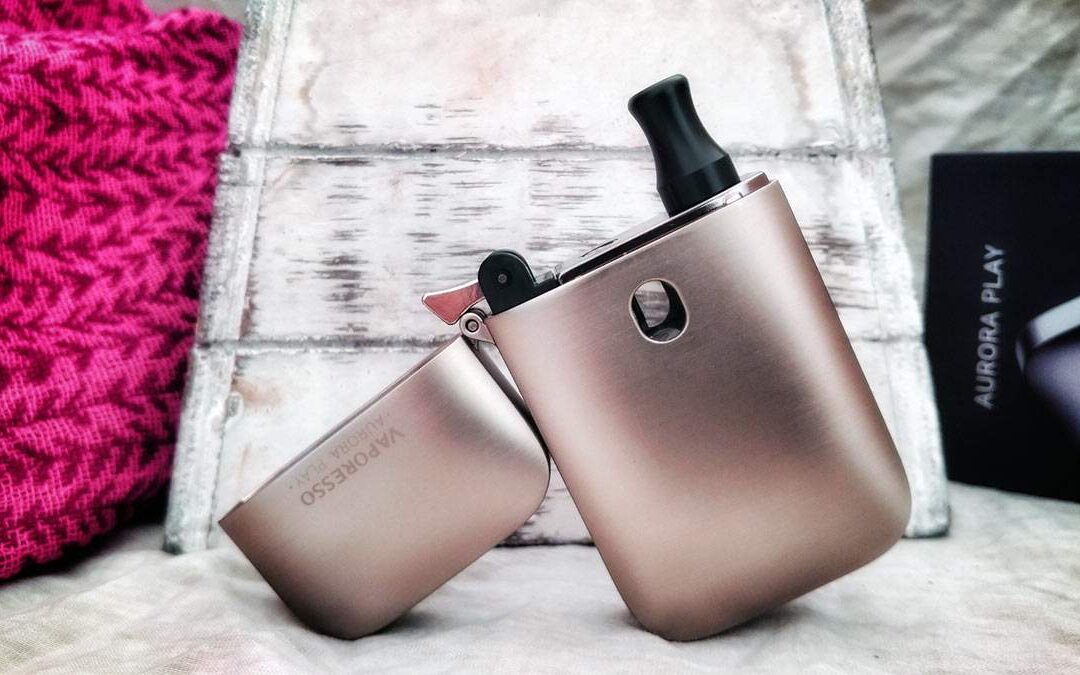 In the world of e-cig, one of the best and most popular solutions for those who have decided to abandon traditional smoking in favor of electronic smoking, is represented by the Pod Mods, a happy and practical evolution of the first cigalike of a decade ago. These are very compact and easy-to-use personal vaporizers, able to make the transition from analogue to electronic cigarettes absolutely easy and with little impact.

Vaporesso, one of the most worldwide famous brands in the production of vaping devices, after having marketed the excellent Pod Mod Renova Zero, is launching Aurora Play the revised version of its big sister Aurora. This is a much awaited Pod Mod, especially for its aesthetic profile that is very reminiscent of a well-known historic lighter.

As usual, at the beginning of the article we look at the contents of the product (in our case a sample 1-A in silver color).

The silhouette of this Aurora Play certainly does not go unnoticed, making the line, all too clearly, to a very famous American lighter. And in fact to think of it, it is precisely in its appearance that may reside the fortunes of this pod mod, especially if supported by level performances, at least in line with the medium-high standards now required by the market. Upon opening the package, after observing it for a few moments, I repeat to myself that if Aurora Play is performing as well as its captivating aesthetics, then it really will be one of the 2019 Best Pod Mod.

Compared to its older sister, Aurora Play looks much more refined from an aesthetic point of view. Its line is softer and more compact and the satin effect gives it sobriety and elegance that is truly out of the ordinary. Very pleasant to the touch and also rather massive, the feeling is immediately great with this zinc alloy pod mod; it undoubtedly presents itself as an object of a certain value. The POD fits easily on the battery thanks to a system of two magnets that allow a perfect seal on the internal body of the mod.

The only defect we found from the constructive point of view is the lateral play of the cover when the Pod is open. 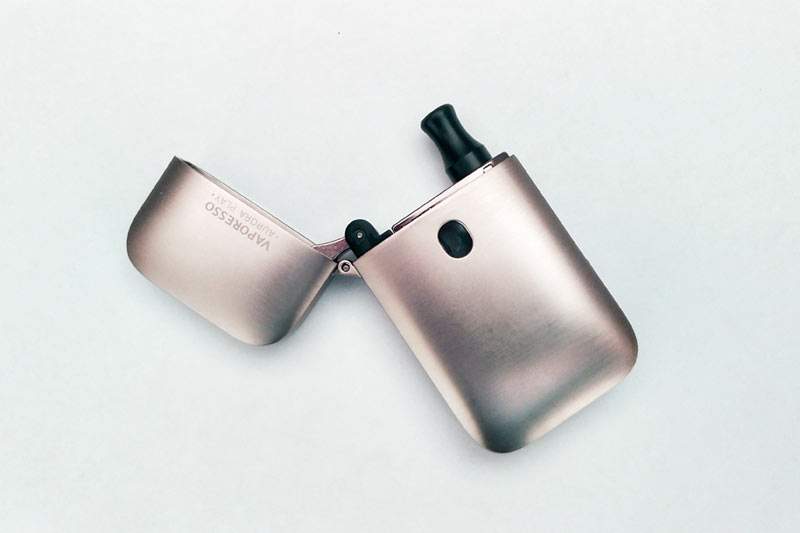 Let’s take a closer look at the features of Aurora Play. The pod mod measures approximately 79 x 43.5 x 16 mm and has a weight of around 97 g, definitely higher than the average of the most common mod pods on the market; in a certain sense this weight contributes to ensuring that the Vaporesso product returns an idea of ​​great solidity. Aurora Play is equipped with a 2 ml capacity cartridge (POD) and a 1.3 ohm ceramic coil (CCELL coil).

The device is switched on and off with the classic sequence of five close clicks; once turned on, with three close clicks you can choose between one of three different power levels: 9 watts (red light), 10.5 watts (blue light), 12.5 watts (green light).

The Aurora Play battery has a capacity of 650 mah (on average with its competitors) which guarantees a good autonomy (from my tests about 4-5 ml of liquid) and also a 1A charging system that completes in about 45 minutes its recharge cycle (green light on).

As already seen in the review of Renova Zero, the Aurora Play is also equipped with an automatic temperature control system that prevent the so-called “burn hits” which in this case would occur when the liquid inside is exhausted. An interesting solution that I was able to verify works correctly. In addition, the mod is equipped with a transparent window for checking the e-liquid level; a solution that may seem trivial but I assure you that it is very useful and intelligent.

Finally, on the Omni Board Mini circuit of Aurora Play, are also available the most classic protection systems against short circuits, overtime vape for over 10 seconds, overcharging of the battery and  ESD protection. 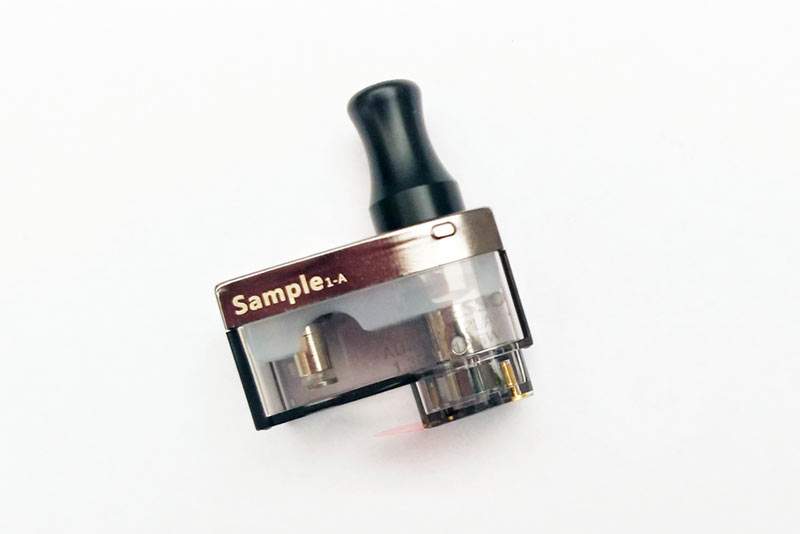 Aurora Play has a 2 ml POD that can be recharged through a system absolutely super easy. Vaporesso has really simplified the only operation that tends to discourage novice vapers. The cartridge can be refilled without even having to remove it from the mod, using the valve placed next to the drip tip. It will be sufficient to lay down and then push down the bottle supplied by the manufacturer or any other bottle with a thin and resistant tip. The level of the liquid inside the cartridge will be checked through the side window. Perhaps it has never been so easy to vape with a pod mod or more generally with an e-cig!

Aurora Play is a Pod Mod that, once turned on, works automatically without using a fire button. Its puff has a good hit (the pod is essentially designed for salt nicotine e-liquid), it is moderately contrasted, silent, fluid and returns a rather dense and warm vapor. During my test I never ran into unpleasant splashes of liquid, pulled dry and I didn’t notice any kind of leak. The condensation problems that often occur externally below the cartridge are also almost non-existent.

Thanks to the CCELL coils Vaporesso, with this device it is possible to use liquids with a maximum density of VPG 70/30.

And talking about aromatic performances, how does the device behave? The aromatic performance of Aurora Play is in my opinion more than good, certainly superior to that of the Renova Zero seen a few weeks ago. I believe the combination of the 1.3 ohm CCELL coil with this 510 style drip tip is the secret of this success. I tried the Pod with different types of e-liquids and believe it or not I was pleasantly surprised also by its yield with an organic tobacco e-liquid created for non-rebuildable systems (I’ll talk about it soon).

I believe that overall the manufacturer has achieved a more than satisfactory result considering that we are always dealing with an entry level system. 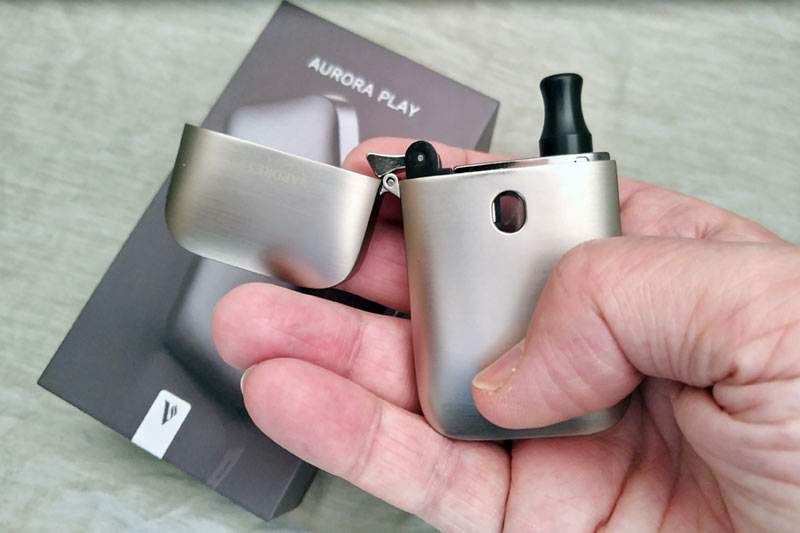 In my opinion, Aurora Play at the moment is the flagship of the Vaporesso Pod Mods, because it is an aesthetically elegant product, refined, solid and above all very valid in terms of aromatic performance. And if it is true that it is still an entry level product, because generally these are the Pod Mods, it is equally true that its undisputed qualities, both aesthetic and functional, make it an object as attractive as ever for those who are about to buy its first e-cig is a very convenient solution even for the most experienced vaper.

Unbalanced by telling you that Aurora Play will be one of the most popular Pod Mods of 2019!