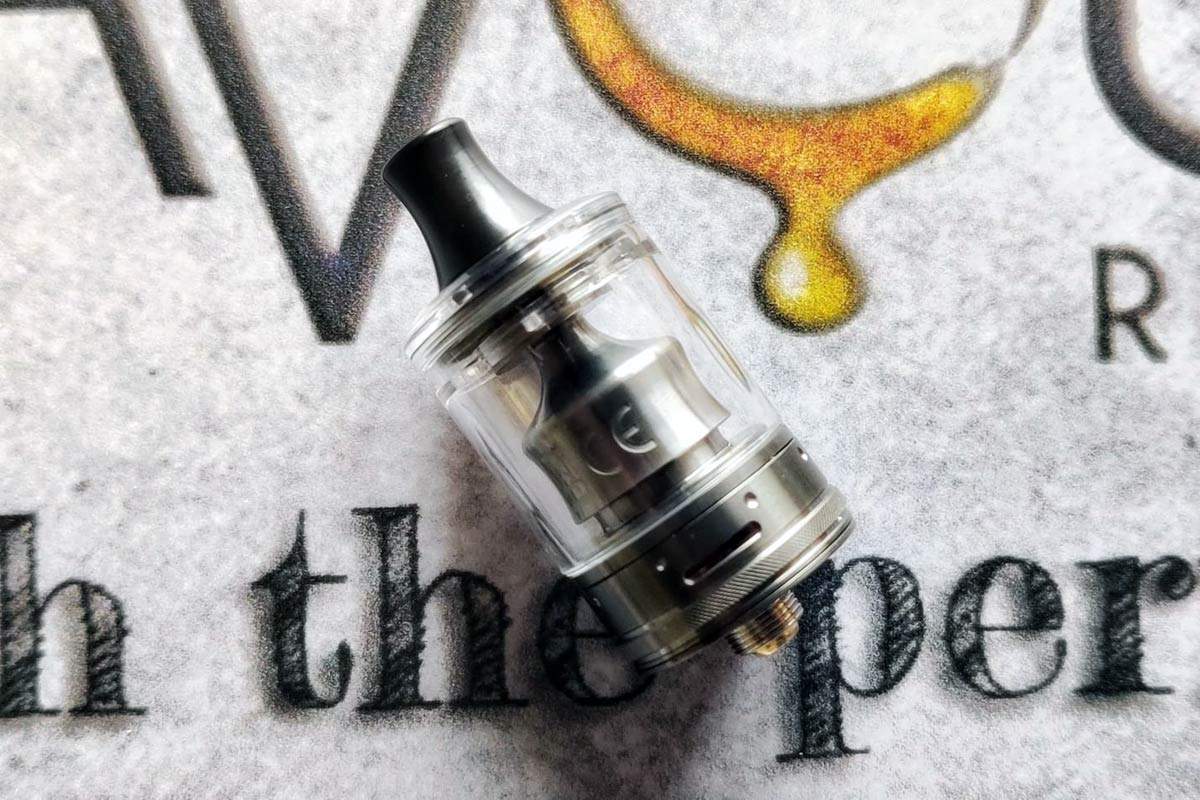 Today I am ready to test for you the COG RTA, the first MTL RTA atomizer made by the Asian manufacturer Wotofo in collaboration with the well-known youtuber “Suck my mod”. Wotofo, which acquired in the last  years international fame in the field of cloud chasing devices (i.e. the Profile atomizer line), now engages in the difficult test of a MTL rebuildable tank, hoping to repeat at least in part of the success with the Profile. It will be like this?

Let’s start as usual by looking at the content of the package. 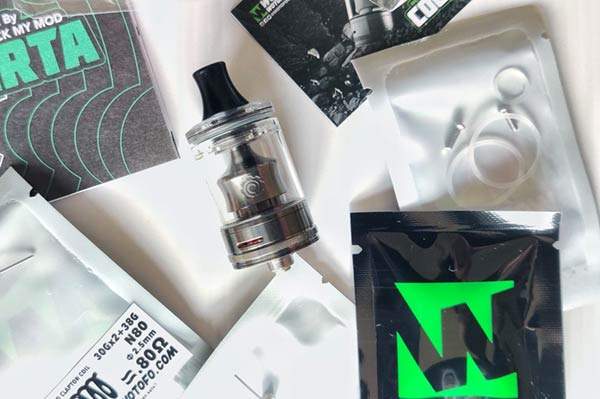 The COG MTL RTA has a stainless steel deck with gold-plated pin and the lower part of the base is transparent. In fact, transparency is the leitmotif of this product, whose tank and top cap is made of PCTG ( polyethylene terephthalate-glycol), a plastic material that is increasingly being used in vaping, as it is able to resist very good both to shocks and corrosion, as well as being absolutely suitable for the most varied food uses (in fact, it complies with EU directive 10/2011 and FDA standards). At the moment, however, the use of this material in vaping is still in an early stage, so to speak, and the vast majority of vapers are not used to seeing hardware products made of polycarbonate. The natural consequence of seeing a polycarbonate atomizer is the feeling of  a product of modest quality that does not transfer a sense of strength and solidity. And this is, I admit, the feeling that the COG left to me once taken in the hands.

Aesthetically, however, the atom, in my humble opinion, has class to sell, above all thanks to the alternation of the metal parts and the transparent material; its lines are slender, light and modern. Transparency is ultimately the cross and delight of the COG RTA, because it gives a very attractive design but at the same time makes it seem qualitatively not up to many of its competitors’ products.

The COG MTL RTA has a diameter of 22 mm and is 44 mm high (excluding pin) for a total weight of only 35.5 grams and 3 ml capacity. For the dimensions just seen, it can be said with absolute certainty that this is a certainly compact and light atomizer. The COG is composed of four main parts: drip tip, top cap, tank with bell and chimney (it is possible to separate the tank from the bell/chimney for more thorough cleaning) and base with deck. The delrin drip tip is 12 mm long (510 connection excluded) and has a 3 mm diameter inlet hole and a 4 mm diameter outlet hole. The bell is quite large (13.6 mm internal diameter), flared on the outside and slightly rounded inside, while the chimney is very short and ends with a 3 mm diameter hole perfectly coinciding with the drip tip inlet hole. The distance between the bell and the tank is really small, which makes cleaning operations not easy unless you decide to disassemble the bell from the tank every time you wash the atomi (rather cumbersome due to a screw that is not easy to unscrew).

The most interesting and also most innovative part of Wotofo’s first MTL RTA is undoubtedly the basis with the deck, because it uses a widely tested but very effective system for the coil building and above all because it uses a new gear system to select the draw airflow. But let’s go in order and start by carefully observing the characteristics of the deck.

The deck, as I said earlier, although not unpublished in the sector, is made with meticulous precision and is well-made and more efficient than ever; the two tower for tightening the wire use a “T” spring loaded clamp system with spring managed by two cross screws, which facilitates the positioning of the wire and the coil building. 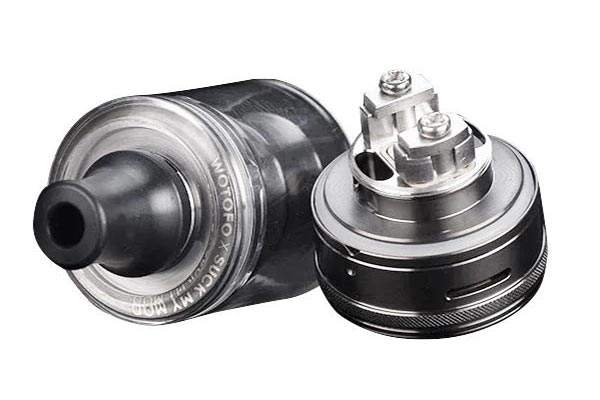 The great novelty of the COG MTL RTA, however, lies in the innovative double gear system designed to manage the airflow control of this device. The base is equipped with two fixed slots for the air inlet (about 5.5 mm wide and 1 mm high) which receive the air from outside and convey it under the deck where, thanks to the presence of two toothed gears, it is possible to change the diameter of the air outlet hole under the coil. On the air ring nut at the base of the deck, there are five points of different sizes, each corresponding to a different diameter of the air hole under the coil (0.8 – 1.0 – 1.2 – 1.4 – 1, 6 mm). To choose the desired hole, the ring nut will be rotated until the chosen point is aligned with a small “V” shaped cleat.

This idea of ​​entrusting the air adjustment to a gear system capable of selecting the diameter of the air hole under the coil, is innovative and ingenious bu unfortunately almost totally ineffective. Despite the numerous attempts and passages between the different holes, is evident the substantial lack of differences in the airiness of the puff; probably a minimal and imperceptible difference can be perceived if you go directly from the 0.8 hole to the 1.6 one, even if I do not exclude that it may be a simple suggestion. The problem evidently lies in the fact that there must be an additional air passage to that of the hole selected on the gear. To want to sum up, I can say that the airiness of the COG MTL RTA is fixed and is to be considered a medium airy MTL vape. I would say that we are in the presence of a puff corresponding to an airflow hole of about 1.4 mm, maybe even a little more.

This device is certainly well-liked on the coiling, wicking and filling side, even for the consumer without experience with rebuildable systems. COG is the ideal RTA for those who must take their first steps in these kind of systems. The positioning of the coil on the deck is greatly facilitated by the clamp system and it will not be complicated at all to center the coil precisely between the two posts. A pinch of attention should instead be paid to the wicking, choosing the correct length and the right thickness of the cotton to be inserted inside the two slots. It is important that the cotton does not reach the bottom of wick holes and that it does not get into the slots too pressed. I recommend to fray it a bit and make it as fluffy as possible to prevent the atom from having feeding problems by going dry. 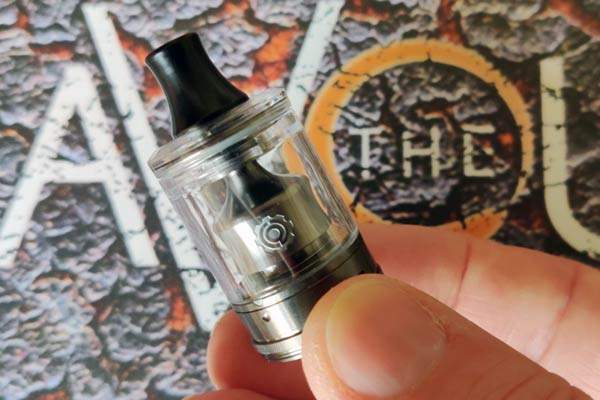 Finally, the tank filling operation is absolutely simple and convenient, which is done from above using one of the two fill ports located on top of the tank itself. The tip of any bottle will enter the buttonhole without the slightest mood.

Before dealing with the analysis and the COG aromatic performance, I will quickly discuss its technical performance which, with the exception of the air regulation problem seen above, is of undoubted quality. I really liked the drip tip both for its ergonomics and for its outstanding performance without any condensation problem. Perhaps the only small flaw found is the tendency of the atom to warm slightly even at low wattages.

As a MTL vape atomizer, I didn’t waste time testing the COG MTL RTA with the three liquids recently made by The Flavourist in collaboration with the Italian manufacturer Officine Svapo. These are three natural tobacco extracts, because in Italy, every self-respecting MTL atomizer must first pass the nine test of an organic tobacco e-juice. The e-liquids tested on COG are: Poncho (single tobacco), Il Monco (tobacco blend) and Agua Caliente (tobacco flavored).

With Poncho a medium intensity single tobacco with characteristics similar to a Virginia but less sweet and with more body, the COG did not perform well. The aromatic restitution did not seem to me up to expectations and the vapor showed a slightly kneaded and too sweet aroma. 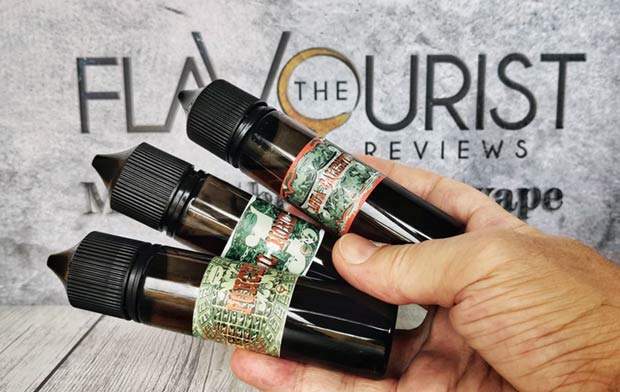 With Il Monco, a blend of medium strong dark tobaccos, the atom was not able to show the many nuances of this blend, perceiving a rather fat, but above all confused and too uniform aroma.

Finally, with Agua Caliente, a blend of tobacco flavored with American sweet potato and blackcurrant extracts, COG has shown a clear tendency to emphasize the aromatic cues of currant, obscuring the more delicate flavor of the sweet potato and making the tobacco blend so confused and altered.

Ultimately for the shape of its bell, for the reduced length of the chimney and for its fairly generous airiness, I believe that this RTA is more inclined and more suitable for other types of liquids, for example creamy and simple fruity liquids tending to be sweet.

Wotofo’s first MTL RTA is an entry level product which is aesthetically very refined but with some technical flaws, above all the innovative airflow system that does not work as it should. From the aromatic point of view, the atomizer is unsuitable for organic tobacco or for dry synthetic tobacco, while it performs rather well with creamy e-liquids and more generally with e-juices that do not fear a uniform, fatty and sweet flavor.

Recommended to: Newbies and skilled vapers.