It’s true, maybe we got there slightly late but, starting today, officially debuts on our blog another Italian tobacco extract manufacturer, probably the youngest company of the ever-widening panorama of the so-called n.e.t. (naturally extracted tobacco) e-juices, a specific vaping market segment, for which our country is the absolute world leader producer. I refer to the company from Reggio Emilia, Estratti Tabacchificio 3.0 by Massimiliano Caliendo, who enthusiastically accepted our invitation to be present on The Flavourist blog.

Estratti Tabacchificio 3.0 officially started its activity only at the end of 2017 but in a short time, at least for those who are the rumors in the environment of tobacco lovers, it has carved out a place of absolute importance and great consideration among the increasingly and may tobacco e-juice connoisseurs. Now it’s up to our team to test the qualities of Tabacchificio 3.0 products and the skills of its creator and flavourist Massimiliano Caliendo.

Tabacchificio 3.0 products are marketed in the format of concentrated flavors in 20 ml glass bottles and must be diluted between 10% and 20%, for a final composition as close as possible to VPG 50/50. The manufacturer informed me that they do not require maturation, they are immediately vapable even if a few steeping days are always advisable.

The first aroma that I am going to test is Eclissi, officially described by the manufacturer:

Refined raw materials and a 12-month aging characterize this Half & Half blend of Virginia and Latakia. The Curring process ensures that the blend continues to ferment, making it sophisticated and distinct. A superb blend, a structured, intense, robust, full-bodied aroma that fills the mouth. Scents of incense lulled by a sugary background, interrupted at times by hints of smoked wood and peat.

It is singular how much the Eclissi smell test gives a different result if it is smelled directly from the aroma bottle or if it is instead done from the mixed e-juice bottle (with a 15% dilution). In the first case it is Latakia tobacco that emerges with strength and cockiness, relentlessly relegating Virginia to the background, but without completely stealing its moist and vegetable notes. In the second case, however, Virginia, although its typical acidity a little undertone, is much more present and easily identifiable and its vegetal hints intersect with light smoky flavors, creating a decidedly more evident aromatic balance than the smell analysis from the aroma bottle

I am preparing for the vape test which, after several tests, I decided to officially conduct with the Purity Plus RTA by Ambition Mods and Alpha RTA by Luca Creations. 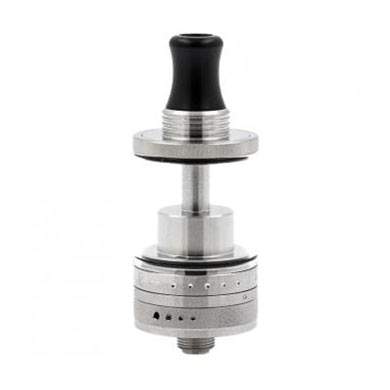 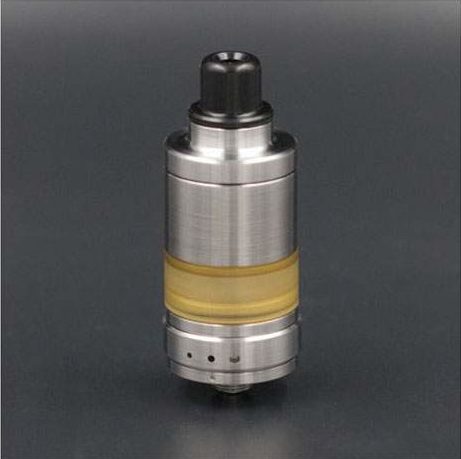 Eclissi, is a 50/50 mixture of Latakia and Virginia tobacco, but it was not obtained by combining the extracts of the respective tobaccos, but with a process called “curring”. This process is a mixing of the dried leaves of Virginia and Latakia and pressing them to create a “cake”. Once properly compacted (photo below), the cake thus obtained is left to ferment and mature for more or less variable periods, allowing the two tobaccos to acquire each of the characteristics of the other, before proceeding with the flavor extraction. What does aromatically change in vaping compared to a classic mixing of two single extracts of Latakia and Virginia? 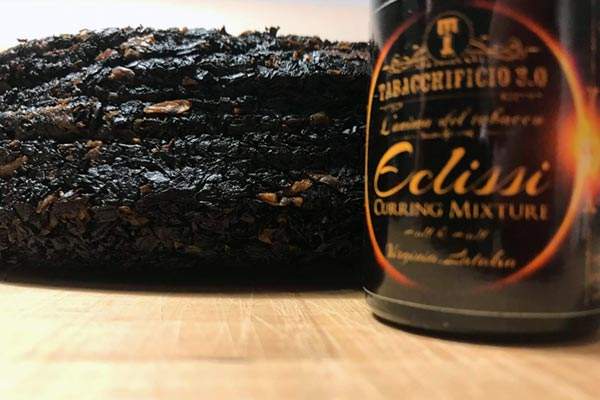 On vape Eclissi shows to be a deep, intense and very rich blend from the aromatic point of view. Since the inspiration, the perceived sensation is that of dealing with a Latakia tobacco “contaminated” by aromatic insertions of Virginia almost certainly Bright. The impact is very pleasant, the aromatic imprint is very present and at the same time refined; the smoky hints of Latakia appear slightly attenuated but are far from laughable and in any case they are the ones who together with a dry and woody background dictate the rhythms of the vaping. I have the feeling of vaping a Virginia spiced Latakia!

The tobacco Virginia, fermented together with Latakia for a long time, releases, especially in the heart of the vape, a sweet sugary trail that lays down on Latakia together with unpredictable and winking slightly acid points. The bouquet is intriguing and oscillates between bitter shades and softer and sweeter nuances in the body notes, even if the distinctions are never so clear. A sensory experience of sure impact and very particular!

Eclissi is a total fusion of shades and shows all the typical hints of the two tobaccos of the blend. Its body appears unique as if it were an extract made from a new type of tobacco created through a sort of cavendish treatment. The passionate embrace between Sun and Moon that overlap to create a total eclipse …

Pro: New and intriguing aromatic experience with a Latakia and Virginia “cavendish treatment”

Cons: It is not as strong as it might suggest