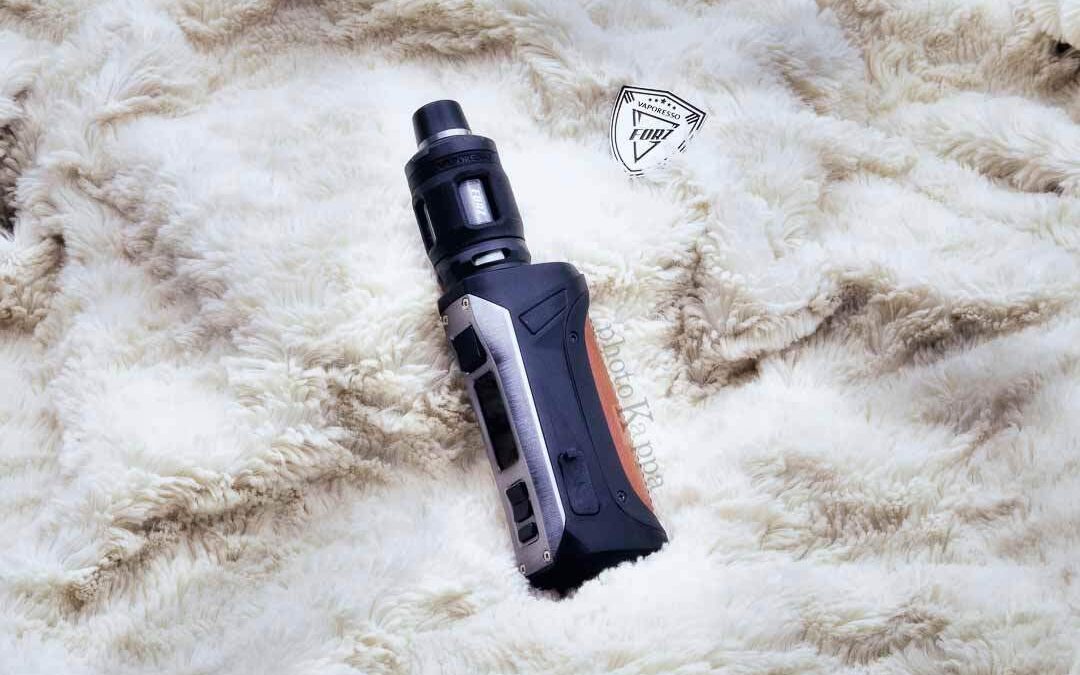 Vaporesso Forz TX80 is resistant to everything!

In China it seems that the trend of the moment is to produce water, dust and shock resistant vape devices. The first company that launched a product with these characteristics on the market was Geekvape, immediately enjoying great success with its Aegis line. Now Vaporesso also presents itself with its first IP67 certified mod and does so by offering a definitely interesting kit: the Forz TX80 kit which, at least for the part concerning the mod, clearly mimics the Aegis line of Geekvape. Before starting with the Forz TX80 kit review, as always, let’s take a look at the contents of the package. 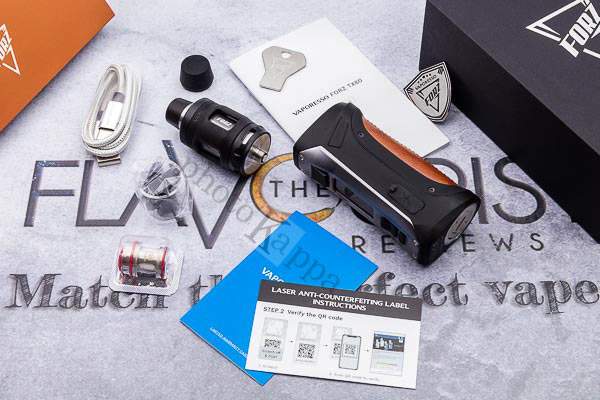 Vaporesso has been standing out for years for being a cutting-edge hardware manufacturer both in terms of technological innovation and purely aesthetic. As we said in the introductory lines, it is undeniable that the Forz TX80 mod is very similar to its direct competitors Aegis Max, or even more so Aegis Solo, which is also understandable if we consider that probably the manufacturer’s intention is precisely the willingness to compete in that specific market niche. The question is whether the Forz TX80 is able to add something new compared to its predecessors.

In my opinion, from an aesthetic point of view, the Forz TX80, while I repeat it, very reminiscent of the Aegis models by Geekvape, is a mod of absolute beauty and elegance. The design, the combination of colors and materials and the satin finishes appear to be studied in every detail, everything points to perfection. But the Forz is not only aesthetic, as its build quality also appears to be top of the range: the zinc alloy body to which is added a rubberized side cover, a back in fine leather and a front panel in brushed silver alloy, all without the presence of imperfections or sinister creaks. There is so much quality in this product. 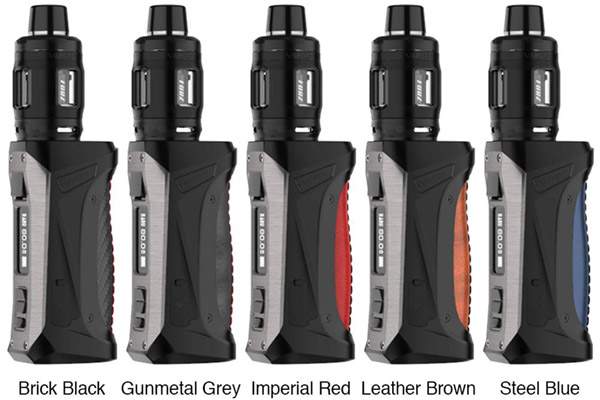 The buttons on the front of the mod have also been designed with intelligence as well as being aesthetically very pleasing; there is only an imperceptible lateral movement of the same which in any case does not compromise their reliability. in conclusion the mod appears very well conceived, assembled with extreme precision and more than ever pleasant for its compactness and not excessive weight. When it is said that the student surpasses the teacher … Oh yes, because the Forz TX80 in my view is better than the Aegis Solo both for design and build quality.

Moving on to the tank side, it must be said that also for the second element of this kit, and believe me it does not happen very often, the right attention has been paid in order to create a product with some interesting news; above all the rubberized coating of the Forz tank which gives it a good dose of strength and impact resistance. However, there are some small imperfections on the Forz tank, which leads me not to consider it a top product (for example the thread of the base is quite noisy and the drip tip has the o-rings a bit loose), even if in definitive the atomizer turns out to have been however well conceived and realized.

The necessary premise that must be made before talking about the ergonomics and portability of the Forz TX 80 kit is that it is a kit designed and studied for vapers with a medium-advanced vaping experience. In this sense, a kit that is altogether 138 mm high, about 38 wide and which has a thickness of just under 30 mm, can be considered a rather compact vape product kit. If we then exclude the Forz tank, it is also clear how this mod is a small one with its 84.5 mm height and a weight with 18650 battery of about 167 grams (122 grams empty weight). I would say that in the field of regulated box mods we are at a very good level of portability.

In the same way it is impossible not to appreciate the sinuous and perfectly designed shapes that give us a more solid and comfortable handle than ever. It is really a pleasure to hold the Forz TX80 in your hands! The handling is also very good, although it seems right to note that the “+” and “-” buttons very close together, and the same function key immediately below, due to their minute dimensions, are not the best solution for vapers with fairly large hands. I would say that in this aspect, Vaporesso has focused a little more on aesthetics than on practicality of access. 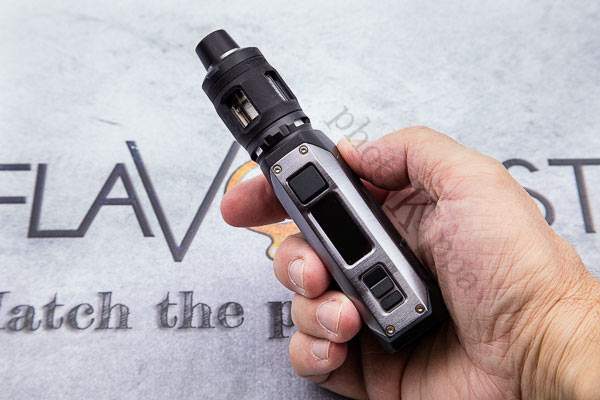 The Forz TX80 mod is capable of delivering up to 80 watts using an external 18650 battery. The device has a USB type-C port with a 2A charge but as always, however, I remember that in the presence of an external 18650 battery, it is advisable and preferable to use a desktop charger. The Vaporesso Forz TX80 has the proprietary Axon Chip 2.0 circuit, which, compared to the already efficient and feature-rich Axon Chip first version, has the interesting novelty of the F(t) mode.

What is it about? It is a new mode that changes the output voltage and heating rate within a certain time, covering a wider temperature range to ensure the e-liquid is highly resolved to provide the original flavor satisfaction. So in practice, once the wattage of the vape has been established, the F(t) mode provides short, gradual and progressive increases of heat to the vapor in the seconds of your puff. 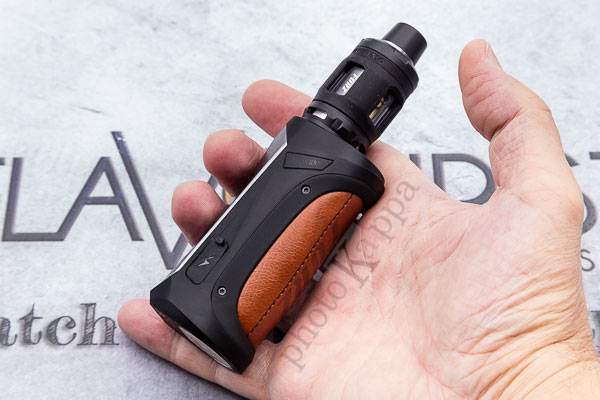 Testing this mode I noticed that the F(t) works very well especially at low powers. Personally, for example, since I usually vape around 15 watts, with the F(t) mode activated I achieved the same aromatic perceptions and satisfactions with only 13 watts of power. The speech changes radically if the powers are higher, because in this case it seemed to me that the F(t) mode affects much less than a classic vari watt setting. 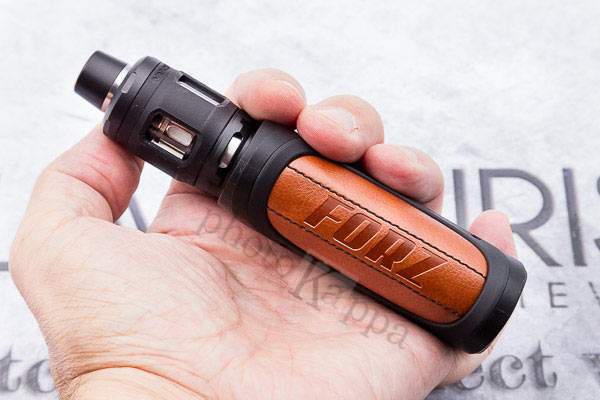 The display of the Forz TX80 is located on the front of the mod, has a size of 0.69 “, it is very bright but it is not in color. Above the display there’s the rectangular fire button, below the display there are the buttons “+” and “-” and the “mode” button (also rectangular). The box turns on/off with the canonical sequence of 5 close clicks of the fire button while with 3 close clicks of the same button the function keys are activated/deactivated. The mod can accommodate atomizers up to 25 mm in diameter and has a floating pin which, following countless empirical tests made, makes it easy to recognize any type of atomizer.

It has been said that the Axon 2.0 circuit possesses the great novelty of the F(t) mode analyzed at the beginning of this chapter, but exactly like the first Axon version, all the other typical functions of this circuit are not lacking on the new chip. 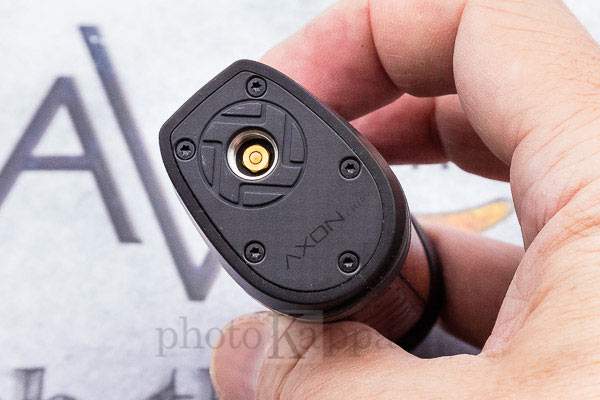 Here is the list of all the modes that the Forz TX80 is equipped with the Axon 2.0 chipset:

For those who want to learn more about the characteristics of these functions, I refer to the reviews of the Gen and Gen S models. 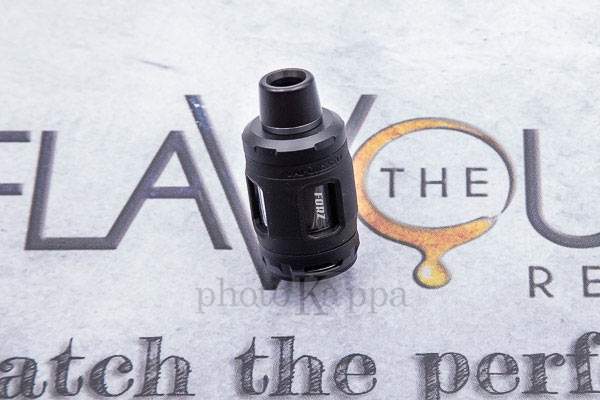 Compared to the first version of the Axon, the very intuitive approach that facilitates any action and interaction with the box does not change: everything is extremely easy with the Axon chip 2.0. In addition to the dispensing key, there are three function keys below the display, a system that considerably simplifies the settings of the box functions. The lower button allows you to access the settings menu (three close clicks) and to confirm each choice made. With the “+” and “-” buttons, on the other hand, you can move between the various menu items. All really extremely simple.

In this Kit, the new 25 mm Forz tank atomizer has been combined with the mod. The tank has a capacity of 4.5 ml in the standard version and 2 ml in the TPD version. This is an atomizer with standard lines but which comes with two interesting innovations: the rubberized coating (with four openings for e-liquid control level) to protect it from bumps and accidental falls and the new GTR coils series created on purpose for this new tank.

The Forz tank has a useful silicone cap to protect the drip tip, is 52 mm high, has a diameter including its coating of 27 mm and weighs just over 64 grams. Thanks to the external rubber protection, this tank transfers a strong sense of robustness.

The Forz tank is a top refill atomizer; the top cap has a quarter turn screw and works without any problems. The e-liquid filling slots are two and have a width of about 10 mm and are excellent for any type of bottle. The 810 drip tip (o-rings a bit loose) has a inlet hole of 6.0mm and a outlet hole of 8.1mm. The pin of this tank is gold plated and protrudes very little, which leads us to advise against its use on mechanical mods in all ways. Finally, at the base of the tank, there is a ring for airflow control with a triple slot (completely partializable and equipped with a limit switch) with dimensions of 10.3 x 2.5 mm. 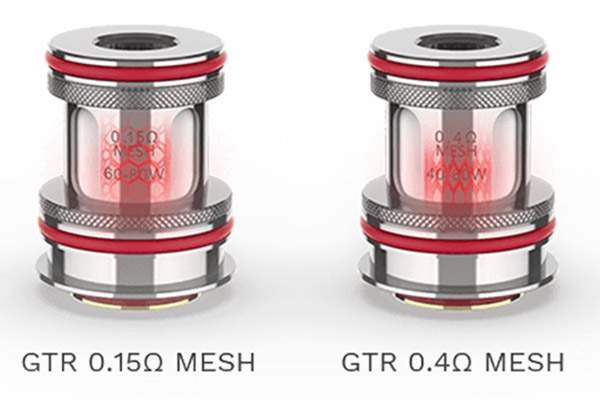 On the coil side, let’s now take a look at the new GTX series created by Vaporesso. In the package there are a 0.15 ohm mesh coil and a second 0.4 ohm mesh coil. The GTX coils have been specifically designed for a direct to lung vape (DL) and thanks to their large e-liquid slots, they can boast of having a truly remarkable vapor production.

A second important and effective innovation introduced with these new coils is represented by the creation of an anti leakage structure. Both coils (made with a double layer of organic cotton) are declared by the manufacturer to be ideal for the following vaping ranges: 60-80 watts for the 0.15 ohm and 40-60 watts for the 0.4 ohm. 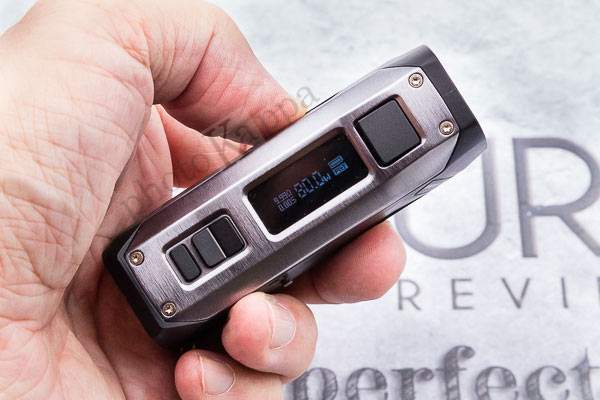 To replace the coils it is necessary to unscrew the base of the tank and extract the coil housed under pressure with the classic “plug & play” system. To be honest, it must be said that removing the coil appeared a bit difficult for me due to the lack of a secure and solid grip; luckily inside the package there is the tool for disassembling the glass tube that comes to our rescue also to carry out this operation.

And from an aromatic point of view? In my opinion these coils are not yet to be considered at the top in terms of aromatic performance. I believe that both are still a bit below the quality achieved with some of the GTX series coils (especially those designed for medium-low vaping ranges). Both guarantee an incredible vapor production, the 0.15 ohm however, in addition to being quite noisy, consumes too quickly the 18650,  and therefore at the moment I believe that between the two the mesh coil is to be preferred. 0.4 ohm which, in general, manages to return a good aromatic intensity and a pleasant roundness of taste around 50 watts.

The new Vaporesso Forz TX80 Kit has very positive aspects and others probably to be reviewed in the short term. The mod is qualitatively perfect and objectively beautiful, much more than its direct competitor Aegis Solo. Perhaps the functions present on the circuit begin to be a little too many and with few discernible differences. I would like to suggest to Vaporesso to focus on less modalities and develop them better.

The Forz Tank as it was conceived is very interesting but its coils (appreciable in the aromatic yield) ask too much of the Axon 2.0 circuit equipped only with a 18650. It will be because I am Italian, and as such a lover of MTL vape, but more that never this time I think a well designed MTL atomizer would make the fortunes of this mod. Will we see it in the future?

Recommended to: Skilled and Hardcore vapers.