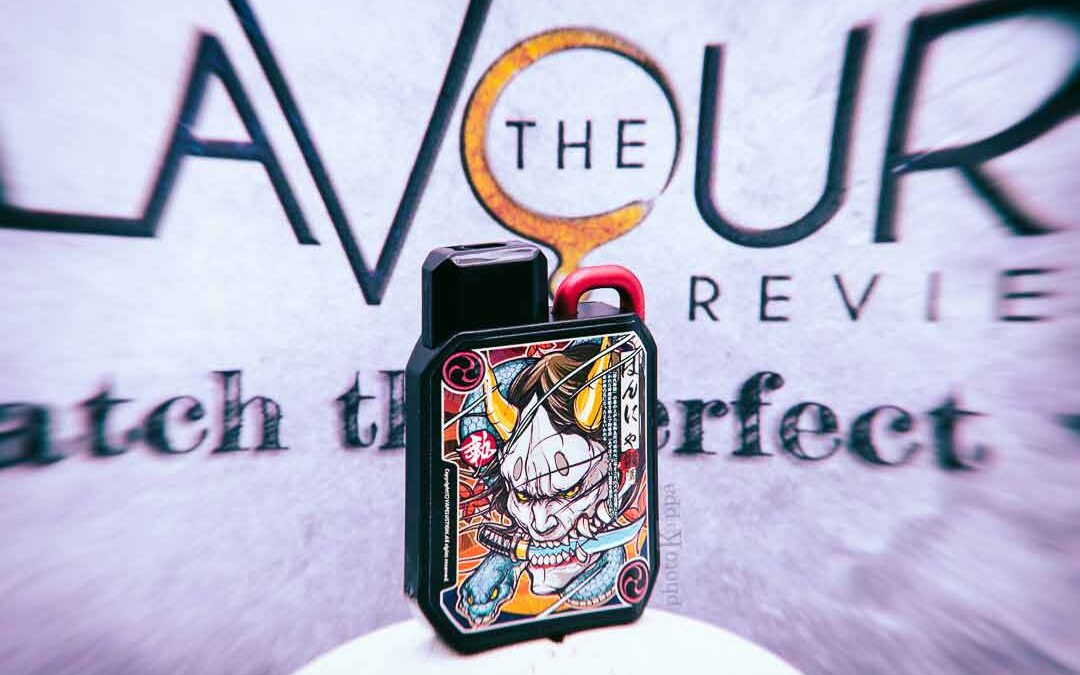 Hannya Nano: a great packaging for a small pod mod

The subject of my review today is a tiny and compact pod mod made by the Chinese company Vapelustion which has only recently appeared on the great international vaping scene, and which objectively is still very little known in Italy and in general on the European market. The device that I am going to review is called Hannya Nano and, judging by the packaging, which is really large and rather accurate for the size of the object contained within it, it immediately seems quite clear to me that this pod system was designed mainly for Asian market and also for an average young audience.

But let’s proceed in order and begin to examine the contents of the package of the product received. 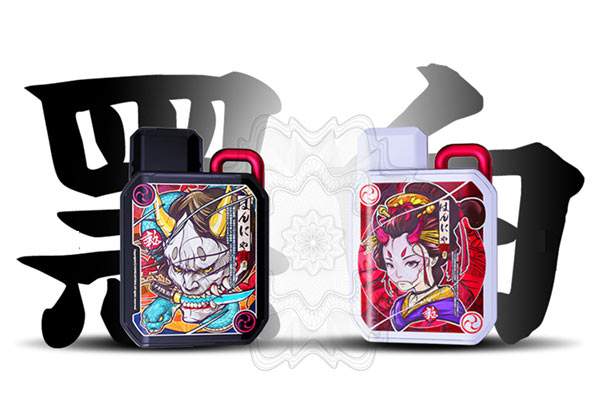 If you are a lover of traditional Japanese graphic arts, manga or anime typical of oriental culture, then surely this product from an aesthetic point of view will be able to capture your attention, also because its striking and extremely colorful design certainly does not go unnoticed. Hannya Nano has a classic rectangular shape with rounded corners, but it must be said that despite its small size it is certainly not a product with a minimal and sober style! From the construction point of view, the mod has a zinc alloy body with a plastic coating, while the side panels (removable even if not quite easily) are made of metal. The general feeling, also due to the “plasticky” sound of the mod once held, is that of being grappling with an extremely entry level object and almost a toy. 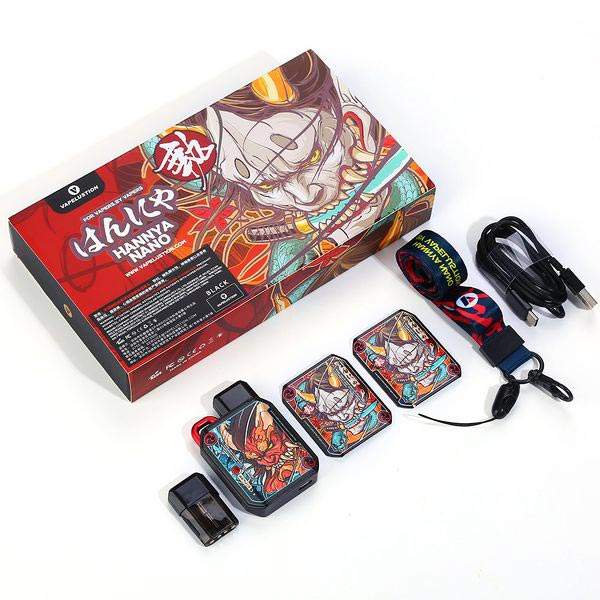 Hannya Nano measures 66 x 49 x 14 mm, weighs around 65 grams with a built-in 600 mAh battery. We are facing a product that certainly makes compactness and manageability its main weapon, but we cannot fail to point out that there are equally compact devices on the market, lighter and equipped with batteries with greater autonomy.

The device is recharged via the USB type-C port and a led light on the lower part of the mod reports the charging status (the LED flashes red during charging and turns white when charging is complete after about 20-30 minutes). The mod is equipped with a pod with integrated headcoil (not replaceable) with a value of 1.2 ohm; unfortunately the manufacturer does not provide other specifications on the pod, nor does it declare the delivery power. 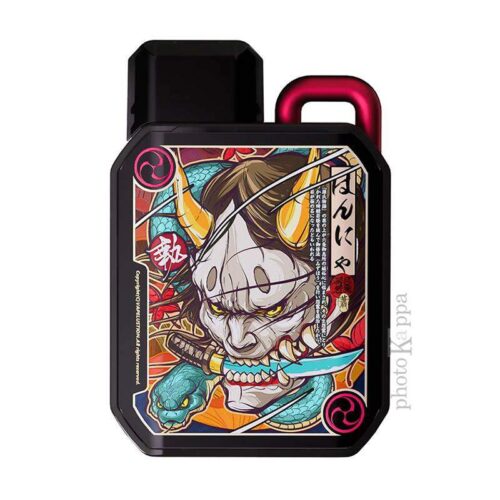 The only information that is reported to us by Vapelustion is that the pod (capacity 2 ml) can be refilled for a maximum of 5-6 times (about 10-12 ml), which also leaves me a bit perplexed, as currently there they are devices on the market with pods with a life cycle of no less than 30 ml of e-liquid.

As an admittedly entry level product, Hannya Nano does not allow you to change/adjust any parameters of the vape. In this sense, the device is only equipped with automatic draw and hasn’t  on/off  button; during delivery, the LED light turns on to indicate the residual charge level of the battery (the red light indicates that the battery is discharged). The airflow of the device is also fixed and the resulting draw is a classic slightly airy MTL. 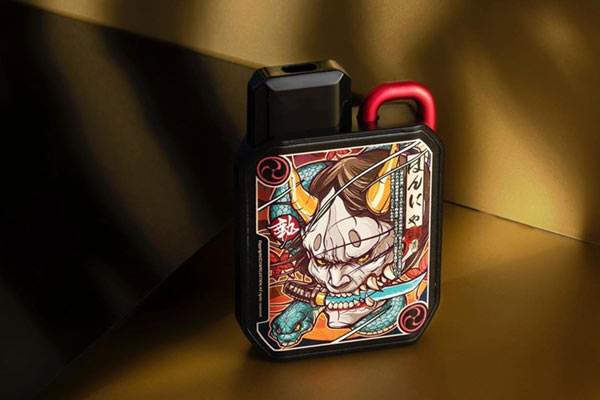 The Hannya Nano pod, as mentioned above, do not have a replaceable coil; it’s firmly anchored on the mod thanks to two good magnets which, however, do not prevent a minimum lateral movement. The drip tip, while presenting a rather square shape, is in my opinion equipped with good ergonomics and feeling on the lips.

To replace a used pod, simply you have to remove it from the mod and insert a new one, paying attention to the its direction (the side with the refill cap must face the ring for the lanyard). To fill in the e-liquid inside the pod it is necessary to remove the black silicone cap and then refill using the appropriate refill hole. There is no an air vent hole but I have not encountered any problems whatsoever in refilling the pod. 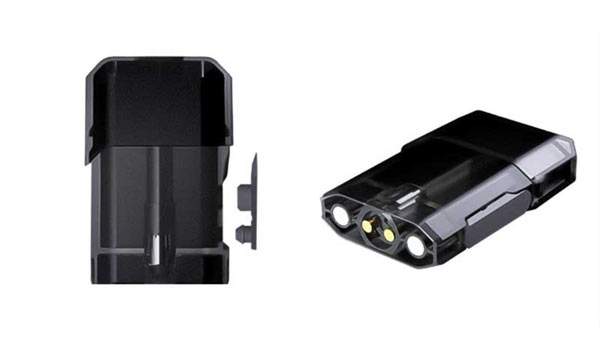 A negative aspect of this pod system is determined by the fact that the pod once housed on the mod does not allow you to check the e-liquid level inside it and it will therefore be necessary to lift it and remove it from the body of the mod every time you want to check the residual e-liquid.

The combination of 600 mAh battery with 1.2 ohm coil and a vaping power (not declared) but in my opinion rather low, guarantees a good autonomy to the device which is around 4 milliliters of e-juice. The Hannya Nano draw is very clean and silent but it sins, not so much for the little vapor produced (secondary aspect for an e-cig), but rather for the almost absolute lack of throat hit and for an aroma that, although not despicable, it is honestly just above enough when compared to other competing systems. 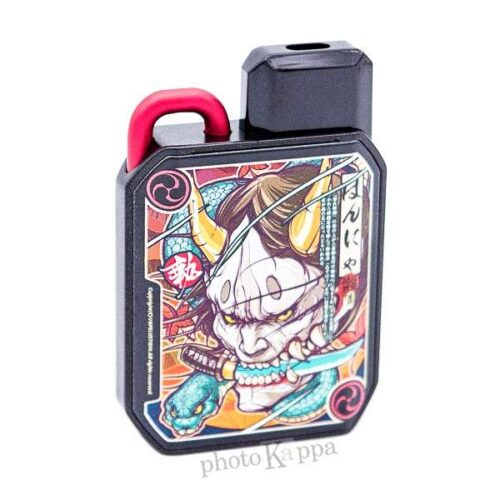 From the aromatic point of view, bearing in mind that this pod mod is aimed at those who are about to try and buy for the first time an e-cig, the result is ultimately acceptable, but a vaper with a minimum of experience will find a certain incompleteness in the aromatic score of any e-juice with a minimum of complexity. The aromatic range seemed somewhat limited to me and this pod mod is certainly more suitable for mono-flavor and dry e-liquids.

Vapelustion for its first pod system seems to have paid more attention to the aesthetic impact (with an eye to oriental markets) than to substance. Hannya Nano is a device that, although it does not present problems in its operation, has in our opinion numerous limitations that cannot make it attractive except to a young audience looking for its first test and experience with an e-cig. Right now the pod mod market offers better solutions.