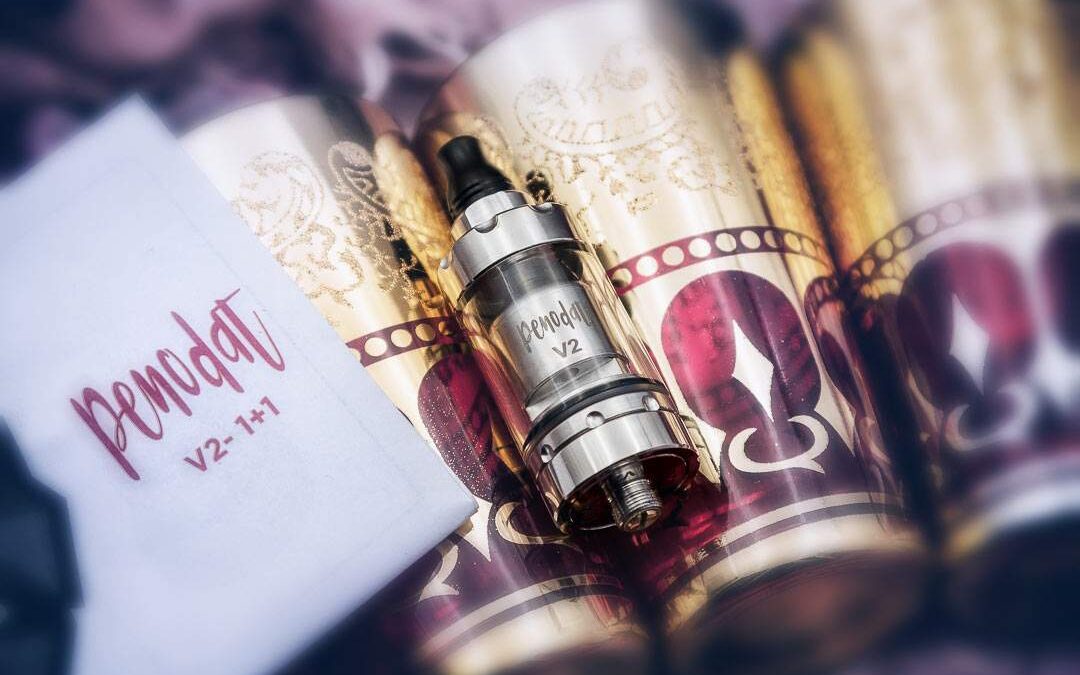 Penodat V2 is really more complete and versatile than the first version?

On the wave of the success obtained by the Penodat atomizer, the Turkish modder Ramazan presents the new version of this MTL atomizer, named Penodat V2. At first glance, the aesthetic differences between the Penodat V2 and its older brother are quite evident, but the question now is: will the Penodat V2 be able to repeat the success enjoyed by its predecessor?

There is no doubt that the first Penodat, despite a not exactly flawless workmanship, such as to deserve in Italy the nickname of the most rustic high-end atomizer in history, proved to be a very good atomizer, especially for its aromatic performance with some types of e-liquids.

Today with our review of the Penodat V2, we will discover all the features, qualities and secrets of this second version and the differences compared to the Penodat V1. Before starting, let’s take a quick look at the main features of the atomizer and the contents of the package in our possession, the full kit version (is also available for purchase a basic version). 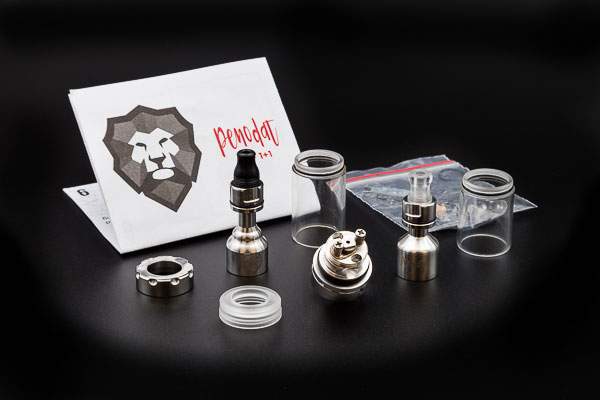 From an aesthetic point of view, the Penodat V2 changes a lot and, in our opinion, it appears to have decidedly more pleasant and balanced shapes; nothing particularly new, indeed the Turkish modder seems to have taken inspiration from several of its competitors, but if the aesthetic features of the Penodat V1 appeared rather coarse and improvised, that is, without a real graphic design studio, with the Penodat V2 on the other hand, there are clear steps forward in this respect. The Penodat V2 is more slender and essential in design than the Penodat V1 and in our opinion even more graceful.

And what about the build quality? Here the judgment is more susceptible to interpretation, as if on the one hand the workings of the atomizer appear better finished and less coarse, on the other the choice of some solutions and materials can suggest a reduction in the general build quality. This is the case, for example, of the two tanks of the full kit, both in polycarbonate, instead of a glass tank in the first Penodat version; or the airflow control ring whose sliding is entrusted to a simple o-ring and equipped with only three single holes, or finally the overall lightening of the weight also due to a smaller quantity of stainless steel used. All this translates on the one hand into a greater lightness of the Penodat V2, but on the other hand in a feeling of less robustness, however deceptive in our opinion.

It is very likely that the design and build quality of the Penodat V2 will again be the subject of long debate within the vaper community, we for our part believe that ultimately the newborn of the Penodat family is in general improved compared to the older brother.

The Penodat V2 is structurally a very simple MTL atomizer, substantially composed of five pieces: from the bottom up we have the base/deck including the airflow ring, the bell with chimney, the tank, the top cap (dual version, stainless steel and polycarbonate) and the drip tip. Just like its big brother, the Penodat V2 is also a conceptually a very essential product that greatly simplifies the life of the vaper both in the assembly phase and in the usual washing and cleaning operations. 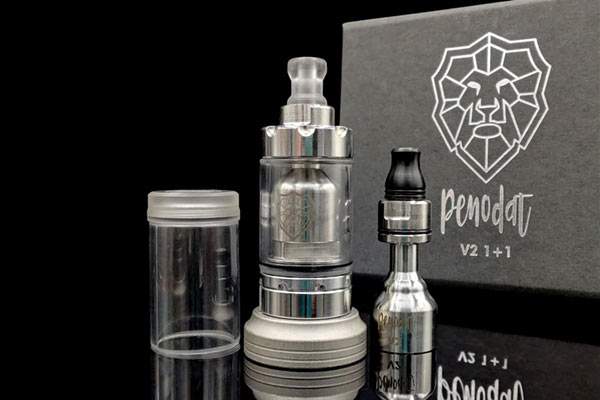 Among the aspects to be highlighted, there is the confirmation that the manufacturing of the atomizer is not exemplary, certainly improved compared to the first version Penodat, but retain that sense of craftsmanship already observed with the first production. We have noticed, for example, that the screwing of the chimney onto the deck is a bit noisy, probably the result of a thread not finished to perfection. On the other hand, there is no stability problem regarding the tank seal with the base, entrusted to a double o-ring that performs its job very well, even if this solution will turn up their noses at all those vapers who hoped for the opportunity to be able to access the deck also with full tank.

The deck of the Penodat V2 is a single coil with opposing turrets (cross screws) and a variable hole under the coil; the modder has made available three air pipes (replaceable thanks to the removal tool supplied) with the following characteristics: an air pipe with a single hole of 1mm in diameter, air pipe with a single hole of 1.5 mm, and finally an air pipe with 3 holes with a diameter of 1 mm each. The space between the two turrets and the space for housing the cotton, leave the possibility of trying different MTL vaping builds, both with simple and with complex wires.

As previously mentioned, the full kit version is equipped with two bells (diameter at the base of 15 mm), each associated with its tank. The longer bell has a flared shape at the top and is associated with the 4 ml capacity tank, while the shorter bell, with a lower and conical shape, is combined with the 2.5 ml tank. The chimney has a diameter of about 4 mm for both bells. We do not hide the fact that this choice of binding the lower and conical bell to the 2.5 ml capacity leaves us a little perplexed: why not equip that bell with a chimney extender to make the 4 ml tank available? 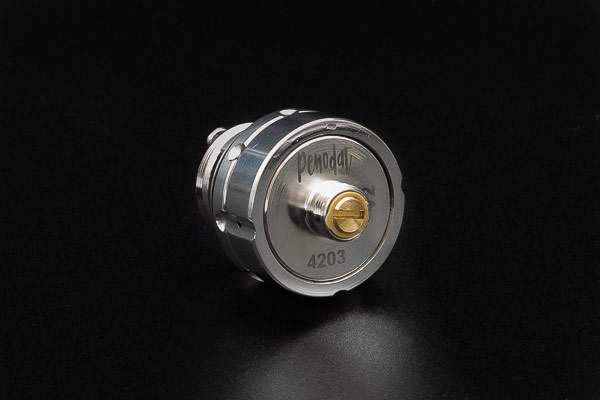 On the Penodat V2 the airflow management is entrusted on the deck to a hole under the coil with its air pipe, and on the outside to a stainless steel ariflow ring that slides on an o-ring without stop; the airflow ring has three single holes of 1.0mm, 1.5mm and 2.5mm diameter. The presence at the base of the atomizer of a clear groove indicates the correct alignment between the hole on the base and the one on the airflow control ring.

Before ending the chapter on the Penodat V2 technical features, we take a quick look at the two drip tips supplied in the full kit version. The choice is between a black delrin drip tip (height of about 12 mm and inlet and outlet holes with a diameter of 3.2 mm), and a slightly lower transparent satin polycarbonate drip tip (about 11 mm) and 3.2 mm holes diameter.

The buuilding operations for Penodat V2 are so simple. As always you have to pay more attention at the wicking operations, although certainly this device raises much less concern than many other atomizers on the market. We just want to remind you that in the case of builds on tips greater than 2 mm in diameter, it will be appropriate to give a slight thinning to the cotton, avoiding that it get too pressed into the housing holes.

The top refill of this atomizer is very simple and absolutely comfortable: you have to unscrew the top cap and fill in the e-liquid inside the tank; the space between the tank and the top of the chimney, although it may seem not very generous, did not give us any kind of problem with any type of bottle we tried, from those with a fine tip, through bottles with a wider tip and even with bottles with glass droppers. 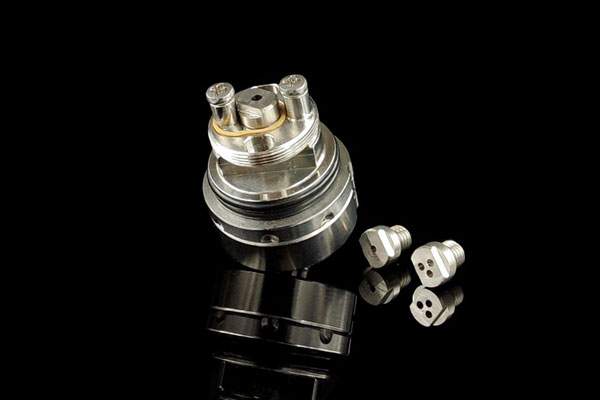 We tried and tested the Penodat V2 with all three air pipes available and found our best setting with the 1 mm single hole air pipe and 1.5 mm hole on the airflow control ring. This is the configuration that satisfied us the most; the draw is fluid, very balanced, with the right contrast and a really satisfying hit in the throat. In short, with the Penodat V2 you’ll have a pure MTL puff, well balanced and sufficiently quiet (perhaps and we repeat perhaps, only slightly louder than the Penodat V1 draw).

In the test with the e-liquid Poncho, that we remember being an organic extract of Verona Tobacco, Penodat V2 gave a good aromatic performance only with the short bell, accentuating the roundness and the vegetal scents of this light tobacco. The vape is pleasant and the tobacco hints of Poncho emerge on the palate with great softness and delicacy. A light all day vape.

Agua Caliente is a blend of extracted tobaccos, flavored with American sweet potato and black currant. Even with this e-liquid it is the short and conical bell that returns the best aromatic performances. The atomizer manages to emphasize on the one hand the sweeter and more fruity shades of the e-liquid and on the other hand to not stun the recognizable tobacco base, within a rather sweet and full-bodied frame. 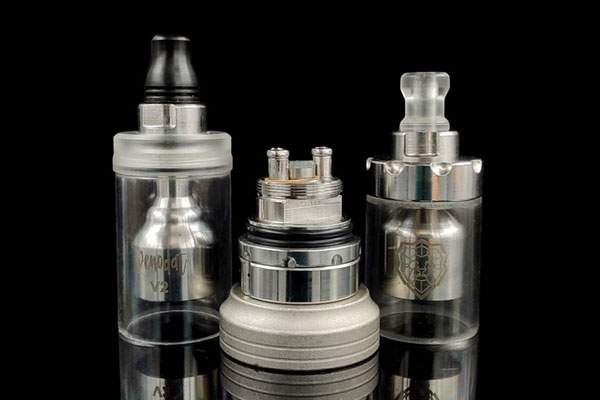 The last of the three liquids tested on the Penodat V2, is Il Monco, a very complex and structured blend of dark tobaccos (click here to find out more), and in this case it was the long and shaped bell that came to our rescue, bell with which Il Monco managed to exalt itself without hesitation by showing off all its many shades.

In addition to the three tests mentioned, other tests were conducted on the new Penodat V2, and overall we found that this atomizer in the full kit version, thanks to its two chimneys, is certainly more versatile than the Penodat V1. In general it proves to be always a very good RTA atomizer with creamy e-liquids, with sweet fruity or with creamy flavored tobaccos, and in our opinion it improves compared to the first version, because it is able to return a more present and marked aroma.

The long chimney supplied introduces the Penodat V2 equally effectively to the world of organic tobaccos in the strictest sense of the word, and makes it appealing to all tobacco vaper lovers who are looking for a certain ductility and ability to do well with a rather wide range of tobacco extracts.

If you loved the Penodat V1 for its aromatic yield with some kind of e-liquids, you certainly cannot fail to appreciate the qualities of the Penodat V2 which, taking the necessary sums, in our opinion is a more than valid MTL atomizer, improved compared to the V1 in its design, in the build quality and also in the aromatic profile. Ultimately the Penodat V2 beats the first Penodat because is more versatile and complete than the previous one.