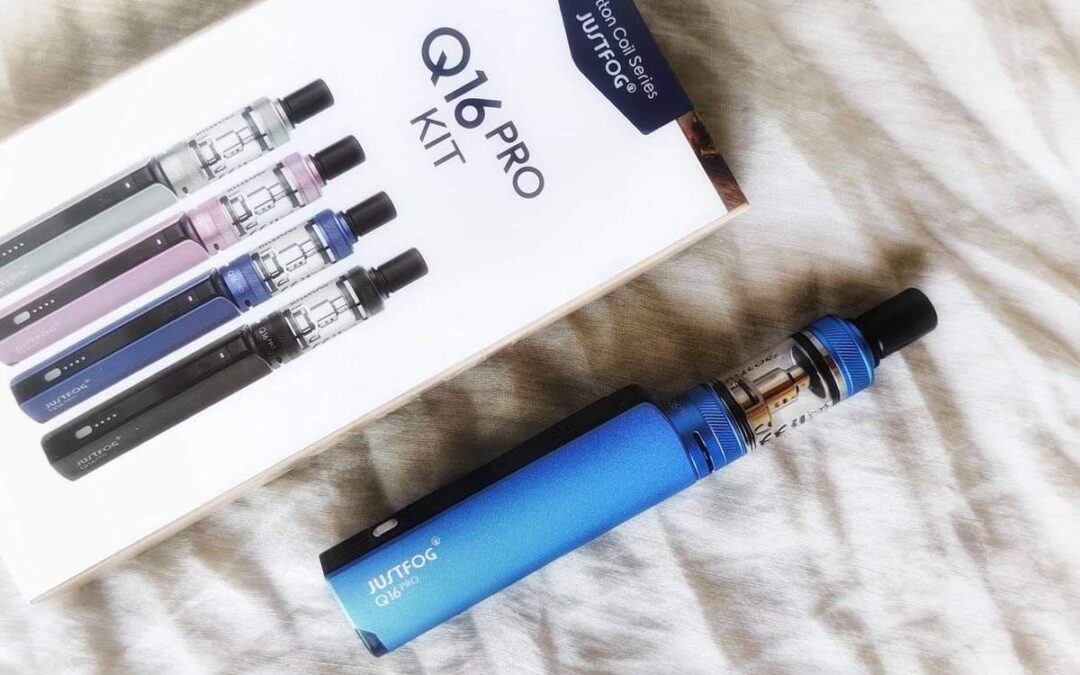 Justfog Q16 Pro, the evolution of the best-selling starter kit

Justfog is undoubtedly one of the most famous vaping brands. The Korean company has been active for about a decade and produces electronic smoking devices specifically for the entry level market. The Justfog starter kits have been the undisputed leaders in the world of vaping devices for years, and probably there is no vaper in the world that has never had or tried a Justfog product.

So today we are dealing with the Q16 Pro starter kit, the evolution of one of the most famous and beloved devices by the Korean company.

Let’s start as usual by looking at the contents of the Q16 Pro Starter Kit package. 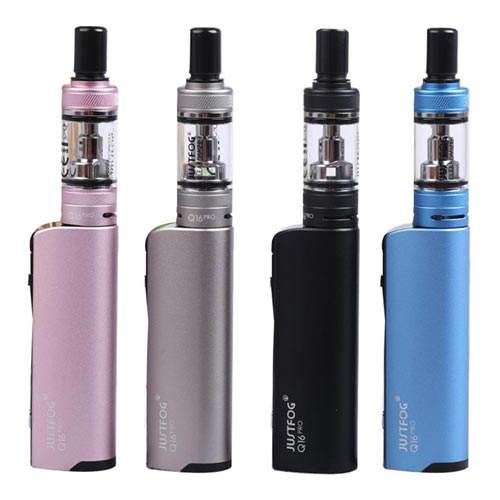 From the stylistic and construction point of view, the Q16 Pro Kit is in our opinion impeccable. Light, fairly compact and well finished, with a very pleasant satin effect. The Kit is a mini ergonomic mod (a sort of parallelepiped with a drop-shaped base) with a small clearomizer (tank) , which undoubtedly approaches to the category of vape pen, even if it is not really a vape pen.

The mod (with a built-in battery) is made of anodised aluminum and polycarbonate, while for the atomizer (with head coil) the materials are anodized aluminum, chrome-plated brass and of course pyrex glass (tank) and delrin for the drip tip.

Justfog has long accustomed us, despite the entry level of its products, to high quality standards and even in this circumstance with the Q16 Pro Kit, fully confirms the absolute goodness of its products. 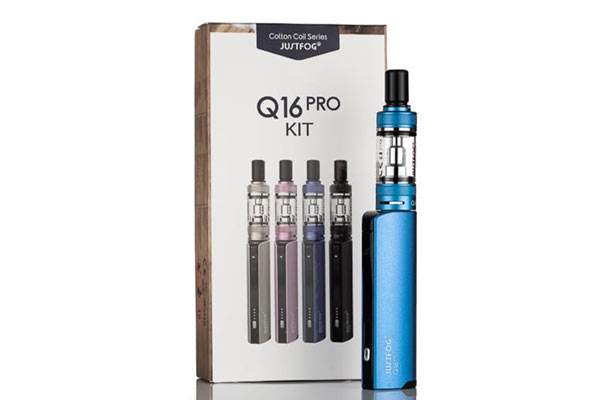 Although it is not a pod system, this kit has more than good ergonomics and, thanks to its low weight, also an equally good handling and portability. An e-cig that handles very easily and that can be easily placed in a pocket, although it will be easily visible from the pocket.

The battery of this kit offers the possibility to choose between four different constant power modes, selectable through the small silver button in the lower part of the mod: power at 3.5V (1 white light), power at 3.8V (2 lights ), 4.1V (3 lights), power at 4.4V (4 lights). 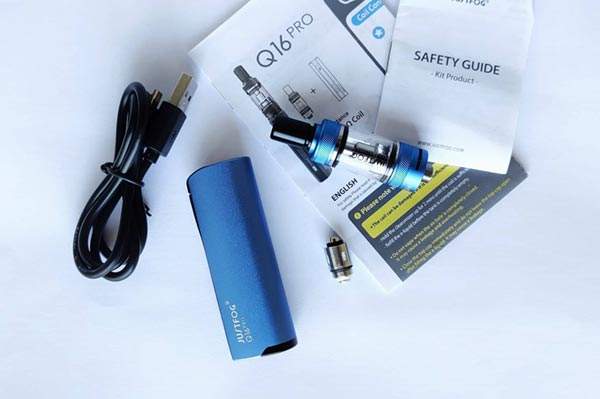 Regarding the LED light for the battery state of charge, the mod is equipped with a LED in the upper part that lights up when the fire button is activated (black button integrated in the polycarbonate mod body). The white LED indicates a battery charged between 100% and 65%, with blue light the charge is between 65% and 30%, the red light indicates a state of charge less than 30% and finally a red light flashing four times indicates that the battery is close to being switched off due to insufficient charge.

At the end of this paragraph, it seems only right to dwell a little more on the battery performance of this kit. Its charging via micro USB cable is completed in just over 60 minutes, but the most interesting aspect is that, despite a capacity of 900 mAh, slightly lower than that of other similar devices on the market, the Justfog battery’s longevity is quite high, thanks to a circuit that is able to better manage its performance. At the maximum output power (4.4V), the battery allows you to vaporize about 3.5 ml of liquid, but it can also reach about 10 ml with the minimum voltage (3.5V), all figures of absolute respect. 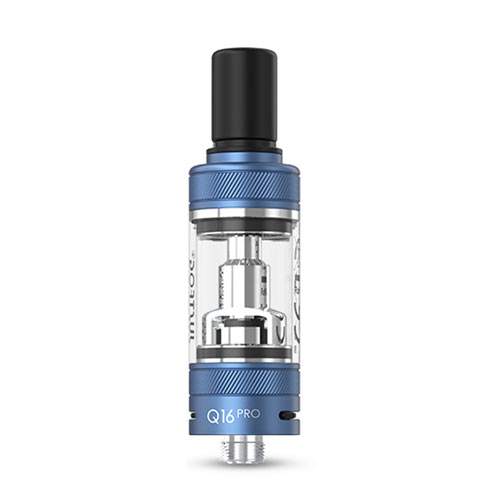 Due to its characteristics, the Q16 Pro kit is an extremely simple device to use, designed specifically for those who are starting out in the world of vaping. The battery as mentioned in the previous paragraph, has two buttons, one black at the top (integrated in the mod body) to turn on/off and to vape, and a silver one at the bottom to select the desired vaping power. For the atomizer, it will simply be necessary to proceed with the usual e-liquid refill operations (now further facilitated because is a top fill) and/or replacement the head coil.

The Q16 Pro kit clearomizer has a diameter of 16 mm and a capacity of 1.9 ml; its parts are the drip tip, the top cap, the chimney, the tank, the base and of course the head coil.

The drip tip is the classic Justfog cylindrical with an inner hole of about 6mm; it has a good feeling on the lips. Once unscrewed, the top cap allows the access to the e-liquid refill area, equipped with two small holes (one of which is for venting the air) for inserting the needles of your bottle. The refill operations are simple and free of complications for most types of bottles on the market (there could be some problems with the bottles with dropper, in truth not so common now). Thanks to the transparent pyrex glass tank, the e-liquid level can be easily controlled in any situation.

The base of the clearomizer has a slot with a lever to adjust the airflow and vary your puff from a very tight MTL to a airy MTL puff; in short, the Justfog Q16 Pro is unquestionably a true MTL vape device. 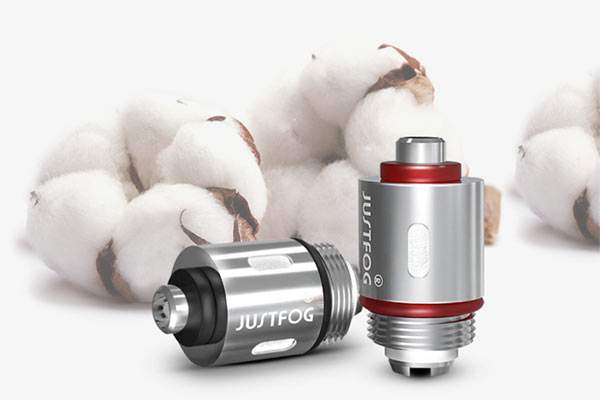 The Justfog coil must be screwed on the base of the Q16 Pro clearomizer; in addition to the one supplied in the 1.6 ohm Nichrome, it is also possible to separately purchase one with a 1.2 ohm resistance. We believe that the manufacturer should also have included the second type of head coil in the kit.

The Q16 Pro puff is absolutely impeccable, as its power is always precise and constant; never at any time we have encountered problems of leaking, spit back or dry hits. With e-liquids in composition VPG 50/50 the Justfog head works very well and is also quite economical in the e-liquid consumption as it is also endowed with an unexpected duration (about 20 ml).

An always silent and linear puff with a smooth airflow, makes the use of this device really pleasant if it weren’t for …

…The aromatic performances unfortunately are below expectations. In fact, from our tests we found a “weak” response from the Q16 Pro in terms of aromatic restitution. The atomizer, although not cutting particular notes from e-juices, always responded with a rather bland and subdued aroma, certainly below sufficiency.

The Pro version of the famous Q16 from Justofg is a kit that, while making some important improvements compared to the first version of Q16, fails to make the decisive qualitative leap in terms of aromatic performances. The coil we tested can be considered of medium-low quality, certainly valid for beginners who do not know exactly the standards of the sector, but definitely not very aromatic for vaper already with a minimum of knowledge and experience in vaping. I wonder if in the future the manufacturer will be able to introduce new head coil that can further increase the value of this starter kit.