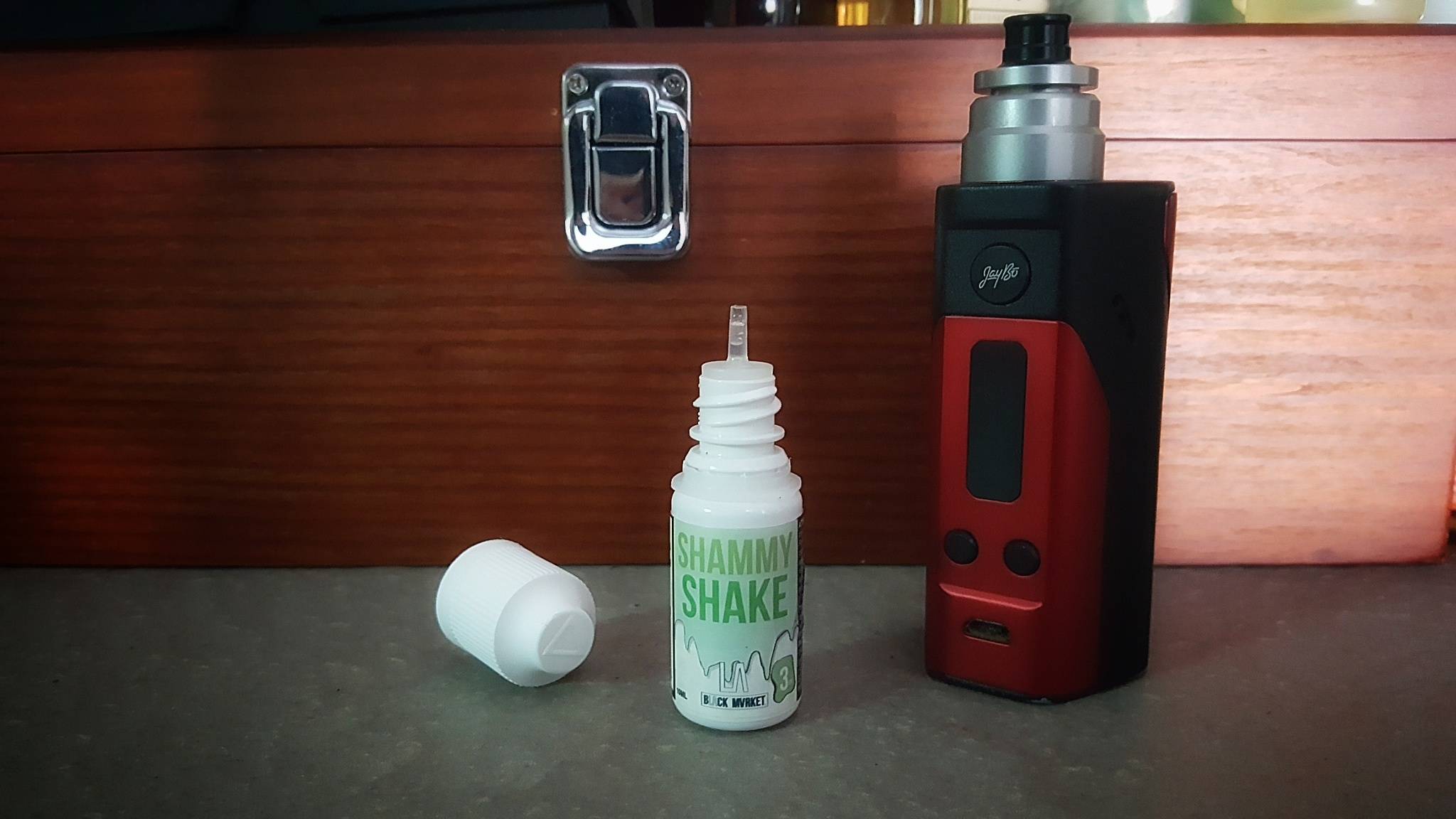 Black Mvrket is a manufacturer and international distributor of the line “Milkshake Liquids” which Shammy Shake is part. Several trademarks treated by this Californian brand. California … a state hyperproductive! 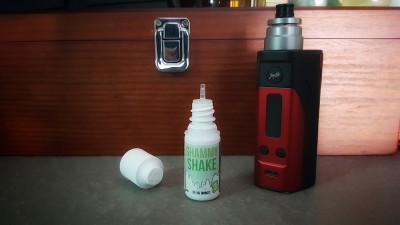 Shammy Shake is described as follows:

Vanilla Bean Milkshake with a lick of mint.

Of course the whole milkshake Liquids line offers variations to the theme milkshake. Looking at the bottle of 10ml in my possession, and the French texts, I understand that the product must have been reconditioned for the European market. In fact there is a tactile dot for blind and, in addition to many requirements for security, also this label … you browse revealing more information to the consumer. Good. So it does when you export to states or continents that have different rules.

The term “Shammy” leads back to the chamois or an absorbent cloth, but in reality – watching the American version of the bottle – we see appear a four leaf clover. Shamrock. That four-leaf clover (sometimes clover) acquired as a symbol of the Irish nation and the city of Boston, a city that once hosted the migration of a large Irish community. You see it appear in the sports world (Boston Celtics), but also of many Irish gadgets, pub … in short, everywhere Ireland wants to be represented. 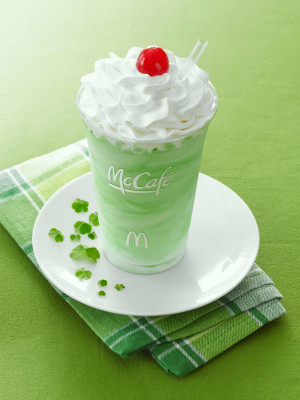 We fly over and pass the smell of Shammy Shake. The olfactory bouquet is spartan perhaps, but very pleasant. Compared to the official description ufficile I can feel all the simple ingredients of Shammy Shake. Vanilla ice cream, incorporating strong glazes Mint. A mint that, from an olfactory point of view, it seems to be very similar to the typical aroma that you would use in the realization of a milkshake. Not a natural mint then. Yet, I notice a caramel fund that binds to the vanilla ice cream and that reinforces the expressiveness of the mint flavor, making it more vivid. A great fragrance that finally reminds us a simple milk mint.

For the test I decided to opt for a setup in coil acronyms to have a soft vape. I start with a power of 32W and the first puffs are extremely nice. Well-balanced mix of ingredients – as mentioned in the olfactory – involves the insertion of a good amount of caramel, to structure the aromatic return of what should be a vanilla ice cream and mint. Mint and additives sweeteners make particularly sweet puffs. Maybe too much respect to a credible milkshake. Still, this means they can prolong the aroma perception. A persistent flavor, very sweet, which in the queue perceived leaves a delicious taste of mint and vanilla. Mint is certainly not aggressive, indeed. Albeit natutale as taste, it reminds us more candy. Graceful! 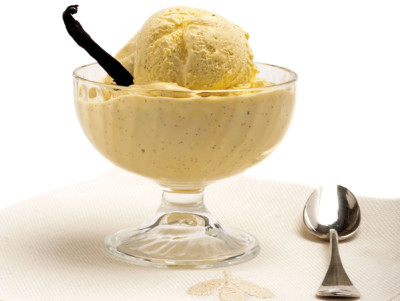 Trying to increase the power, towards 40-45w, mint reveals an expected “fresh” that at low power is not perceived. The overall sweetness seems to increase, but the idea of milkshake … disappears to make way for a simpler and credible milk mint. Really very similar and strangely … richer flavor. 38w, with this setup, they seem to be a wise compromise. 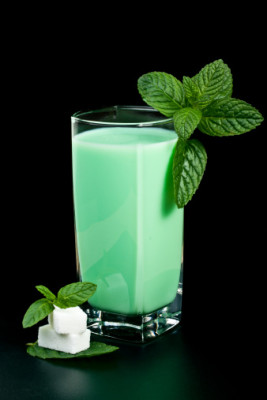 The balance of ingredients thus becomes changeable and proves sensitive to changing temperatures, but … these changes are pleasant and well accepted. Nice to vape in all conditions. By increasing the temperature, mint acquires greater force. An interesting aspect unfounded. The aromatic persistence, however, does not change from the point of view of taste. It appears more sweet. The milkshake proposed by Black Mvrket is perfect. But increasing the power, vaporization tends to enhance the combination of caramel and mint. This compromises the perceived perfection of the excellent vanilla ice cream, at lower temperatures, it loses its balance. Shammy Shake is a milkshake taste and I think should not be subjected to excessive power.

I think this is an e-liquid particularly successful and surprising. To the point that they can be appreciated by a wide audience. The recipe is simple, but well done. The taste of Shammy Shake exceeded initial expectations during the vape test. If the olfactory examination revealed a Spartan bouquet, vaporizing it turns into a liquid at times “explosive” although tastes are delicate. That’s thanks to a unique creaminess. Well measured. It is not clear whether the real inspiration is a milkshake, a milk and mint or a candy mint. Tastes very similar to instill among them, but that work. It is easy to become attached to Shammy Shake. Personally I see it as an e-liquid can break the classic routines, especially in the e-liquid sweet scene. This is not an elegant product, but simply very faithful to what was expressed – in terms of taste – by the modern food industry. An industry that will enchant and deceive, exceeding expectations … even those that we would put in a simple milkshake mint.