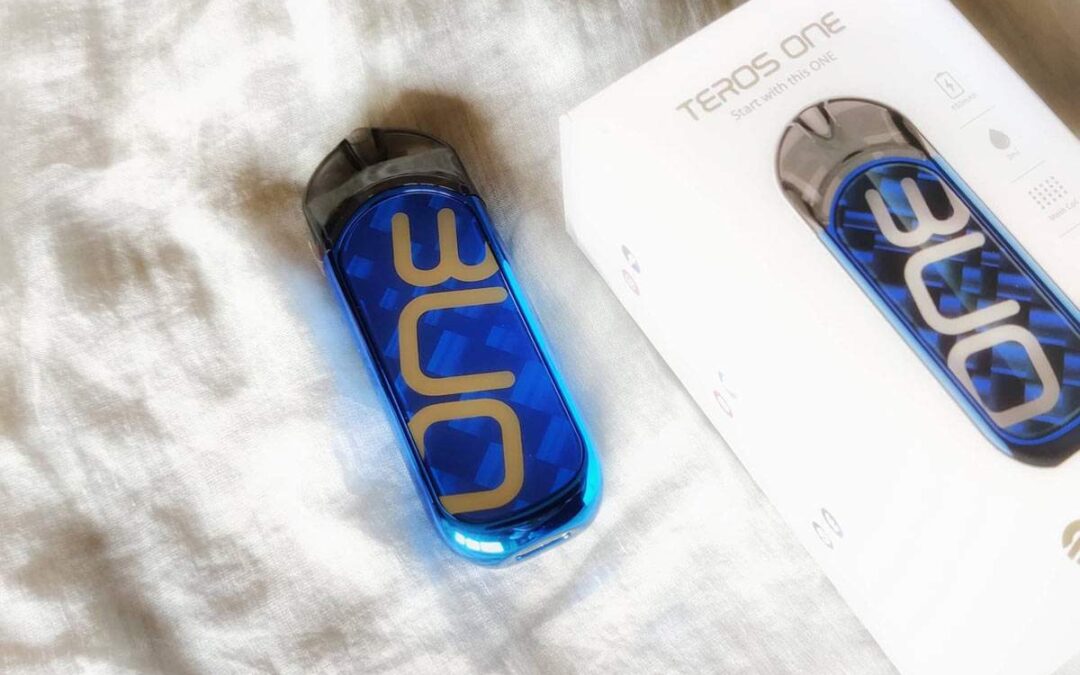 Minute, elegant and automatic: Teros One the new pod mod by Joyetech

Comes from the giant Joyetech, one of the world’s largest manufacturers of vaping devices, the first pod mod in the world externally coated with fiberglass. The new device is called Teros One and we are ready to tell you about it as always starting from the content of the package of the product received. 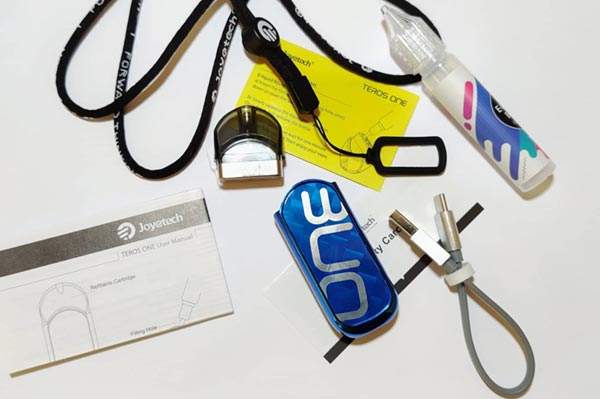 Minute and elegant, that’s how Teros One appears as soon as you see it popping out of its packaging. Although in the forms, the classic ones that we define as a highlighter pen, are not from a new product, there is no doubt that aesthetically the mod is more than ever appealing thanks to the external fiberglass finish that makes it an object with a sparkling and refined look.

The pod mod, whose lines can undoubtedly be defined as soft and sinuous, is also very well built and above all with finishes without any form of imperfection. The pod is housed in its compartment with precision and is held firmly in place by two strong magnets. We are in the presence of a compact, handy and easily transportable device. 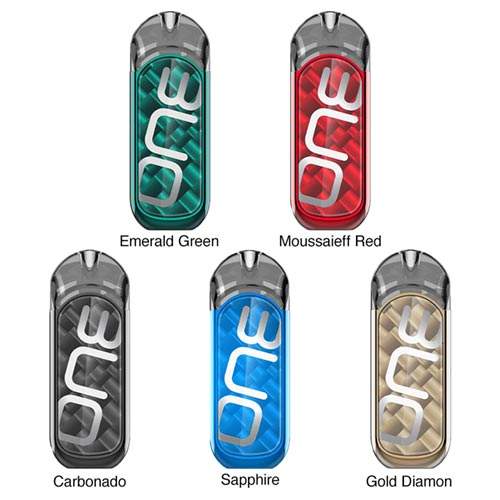 Teros One is a pod mod designed for entry level users and in this sense, the manufacturer has built it with features that fully satisfy the need for simplicity and immediacy by a beginner audience.

The device is extremely compact and measures 80 x 29.5 x 15 mm with a weight of only 65 gr. Given its small size, the battery capacity is also rather small but still on average for ultra-compact devices. The battery has a capacity of 650 mAh, capable of being recharged according to the manufacturer’s instructions in just 30 minutes thanks to the supplied USB type-C cable. From our checks we actually noticed that it takes about 40 minutes to complete the entire recharge cycle.

On the mod there is a black button with a small led light. The button performs the dual function of switching on/off (five close clicks) and change of output power (three close clicks). With Teros One there is no need to press the fire button to be able to start vaping because the device has automatic draw.

There are three possible powers that can be selected with this small pod mod, each characterized by a different color. Therefore, by pressing the fire button three times in rapid sequence, a green light (maximum power), or a blue light (medium and default power) or a red light for minimum output power can be seen flashing three times. The manufacturer does not indicate in any way the watts corresponding to each output power, but from what is indicated on the cartridge it can be deduced that the three different powers are 9W, 11W and 13W.

Like the vast majority of electronic devices on the market, Teros One is also equipped with the most common protection functions. 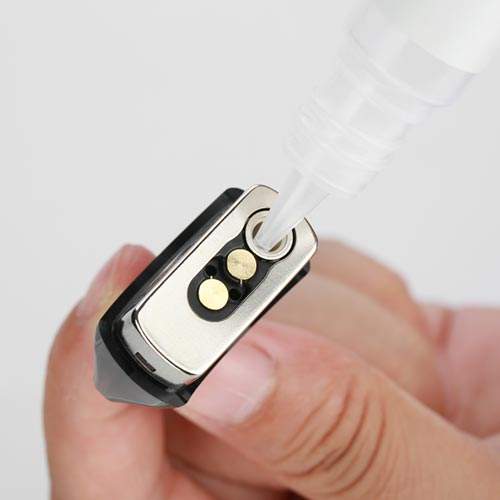 As far as the pod sector is concerned, although Joyetech has envisaged two different types of pods for this device, unfortunately the Teros One kit is equipped with a single cartridge, a little in contrast with the custom of inserting two pods in an entry level kit.

The pod in the package is a cartridge with integrated and non-replaceable 0.5 ohm mesh headcoil in 316 stainless steel and high conductivity organic cotton. The indicated range of vaping is 9-13 watts and the capacity is 2 ml.

The second pod made by Joyetech and sold separately, has the same characteristics as the first with the only difference of the resistive value (1.0 ohm). In the manufacturer’s intentions the 0.5 ohm pod should guarantee a slightly more airy puff than the 1.0 ohm pod with a much more closed and contrasted draw. Unfortunately, we can only test the pod in the kit.

The refill operations for Teros One are extremely simple. In fact, it is sufficient to remove the cartridge from the battery, turn it upside down and insert the tip of the bottle onto the anti leakage pressure valve on the side, checking the charge level thanks to the transparency of the cartridge itself. This is an extremely effective refill system, seen several times with another manufacturer and wisely decided to adopt by Joyetech as well. 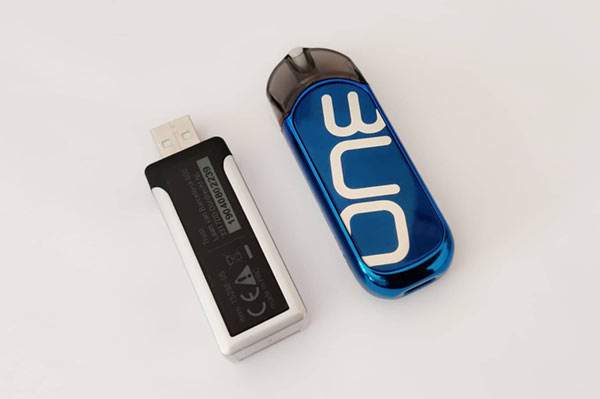 Despite the reduced capacity of only 650 mAh, we were pleased to find that the Joyetech device provides almost unsuspected durability, while on the other hand the e-liquid consumption appears rather high. At the default power (blu led light and about 11 watts), the autonomy of the Teros One is about half a day of use (3.5 hours); at minimum power the duration extends to about 5 hours, while at 13 watts (maximum power) the duration does not exceed 2 hours of use.

The painful notes for this device come alas from the performances of the pod, in our opinion not very exciting. The draw, thanks to an extremely comfortable mouthpiece, is precise and linear, an MTL slightly airy. Even vapor production is more than acceptable if you consider that the device does not deliver more than 13 watts. What made us turn up our nose, on the other hand, concerns its mediocrity in terms of hit and its generally bland and somewhat flat aromatic yield. 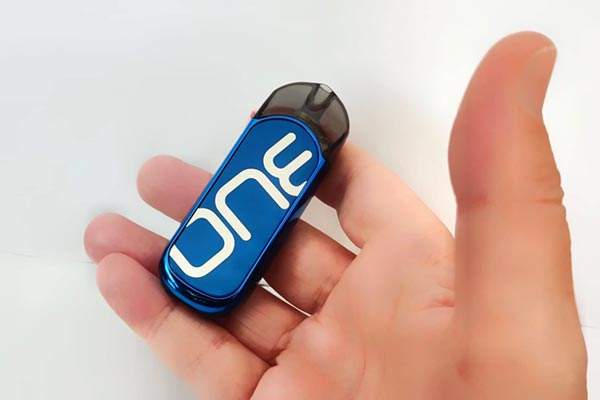 In our opinion, the aromatic performance of the Teros One pod slightly outweighs the sufficiency and for any type of e-liquid. Ingredients and aromatic components of many kind of e-juices only sketched and never clearly perceived, we are in short a step below the average performances required for this type of pod mod.

To the behavior not excellent from the aromatic point of view, we must unfortunately also add a slight condensation problem that is formed as usual externally under the pod and that goes to be deposited on the battery inside the compartment housing thepod itself.

We are convinced that if Joyetech will improve or make new cartridges for this device, Teros One will be able to be considered one of the best pod mods on the market for those who are about to buy their first e-cig.