In just over two weeks the highly anticipated “Vapitaly 2017” open its doors. The event, in its third edition, will take place in the now usual location of Verona, one of the most fascinating cities in Italy and surely of great importance to tourism. From May 20 to 22 the European and international attention of the world of vaping will all be attracted by Vapitaly 2017. Not only because of the ever-expanding number of international exhibitors and the consequent attractive in terms of visitors (trend already observed in previous editions), but mainly because Vapitaly 2017 will boast the title of first TPD ready trade fair.

In fact, on May 20 will end the transitional period granted to the operators in the vaping sector to sell all existing stocks not complying with the new European regulations. Therefore, in Verona we are going to be able to see the first official effects of the TPD among the stands of the numerous exhibitors. The interest towards the upcoming trade fair is really high. Equally high is the awareness that Italy will not only offer a great vaping event, but it will also show that in the vaping field it has reached the maturity that this significant and growing sector of the domestic industry deserves. 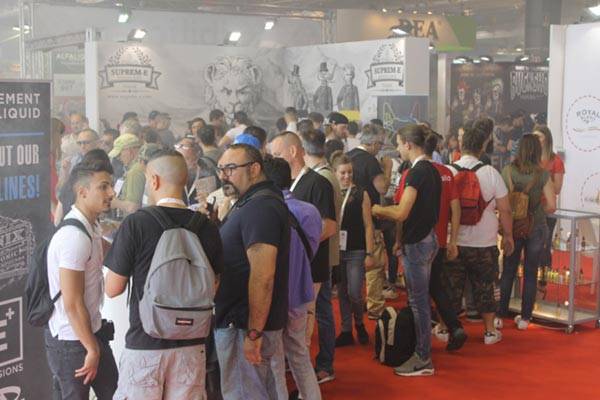 New foreign exhibitors, an increasingly international dimension, numerous events and much more. We spoke about it with Mosè Giacomello, creator and president of Vapitaly. Good morning Mr. Giacomello and thank you on behalf of the staff of The Flavourist for accepting to answer some questions for our blog.

Vapitaly 2017 is coming up and from the first list of exhibitors released by your press office we noticed a positive tendency towards internationalization. Can you give us an overview of the main reference markets and the continents that will be attending the event? How important are foreign exhibitors for Vapitaly? From which areas do they come from?

The 2017 edition of Vapitaly will be by definition “international”. In fact, more than a half of the exhibitors come from the 15 foreign countries represented at the event. In addition to the European hard-core, France and great Britain above all, North America reaffirms its presence with about twenty participants, and Asia with exhibitors from China and Malaysia in particular.

In terms of size, how much has Vapitaly grown from the first edition, both in terms of number of exhibitors and exhibiting space?

Compared to the 2016 edition the exhibition area has doubled, while the number of exhibitors grew by more than 50%, but new exhibitors and co-exhibitors are still joining the list.

As you know, our blog mainly deals with e-liquids reviews. Reading through the exhibitors list we were pleased to note, in addition to the most prestigious Italian brands, the names of excellent new entries, especially among foreign producers, some of those awarded in the 2016 edition of The Flavourist Best of. What can you tell us about it?

E-liquid producers tend to capture the lion’s share by all such events. It is always very difficult to communicate a flavor, an aroma. What better occasion than a trade fair to try them? A walk through the stands will be a real sensory experience with old and new aromas to be tried and enjoyed.

Still on the theme of exhibitors, can you reveal something more, a scoop on some worldwide renown names?

In the next few days we will begin announcing the sponsors of the trade fair. There will be some pleasant surprises, especially for sweets and pastries lovers!

Can you reveal us in advance how many and what kind of events will be held during the trade fair, from the most glamorous to most educational ones?

Vapitaly 2017 will be marked by an even more incisive communication than in the past editions. A video team will record all the most significant events. They will be broadcasted internally over widescreens and externally in live streaming on the social media channels. Various kinds of performances organized by the exhibitors will be held on the main stage and will therefore be broadcasted live. It is also worth remembering that a great variety of street food will enhance the visitors’ experience providing quality food. Finally the VapeWhiteNight, an evening and night happening for all: manufacturers, retailers, vapers. Various DJs will share the external stage and music bands will play the soundtrack of what will become the first great Vaping festival in world. All accompanied by good beer!

Vapitaly 2017, as mentioned before, will be the first TPD ready trade fair ever. Mr. Giacomello, what do you expect to find among the exhibition stands? We know it is a thorny question, but we like to think that Vapitaly 2017 can be a key event for the vaping industry to achieve a definitive maturity, in compliance with the new international rules. If it turns out that some products are nonconforming, what will trade fair organization do?

The question is not thorny at all. We have already addressed the issue in the last edition, involving many experts who have explained to manufacturers and retailers how to communicate about the TPD. We will address the theme again this year with targeted interventions on the TPD and CLP from the retailers’ point of view. The conference will be held on Monday, May 22nd, before the professionals in the sector. Lastly, it’s not up to us to say what is conform and what is not and, above all, it’s not our responsibility to organize the controls. We organize a trade fair, we provide for a setting and we inform about the rules and regulations. But we have no censoring or inspection competence.

Thank you very much, Mr. Giacomello, for your helpful answers. The best of luck and see you in Verona!

And what about you dear Vapers, are you ready?