And also Bounty has a product of the Canadian brand Rope Cut.

Today I will test for you Loose Cannon, thus described by ironic manufacturer:

Let yourself loose with this skillful blend of nuts and tobacco, rounded out with a creamy caramel flavour. 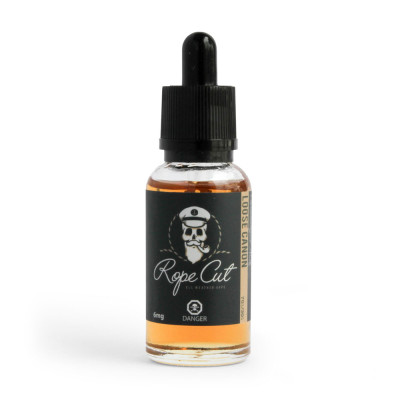 I like so much the bottle, and the labeling, transferring a sense of quality and really appreciable ironic taste.

From reviewer and good old sea dog, I can not even mention the smell before having, somehow, explained what the expression “Loose Cannon”. 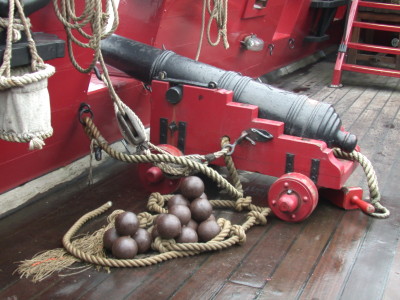 The best translation of the word “Loose Cannon” is “Mina Wandering”. Especially in times of war, in ancient ships equipped with cannons it was a good practice in the evening (or before battle or storm) check that the cords of the guns were well established and held, to prevent this so heavy weaponry could move while browsing (or battle) by affecting the structure or creating problems to the security of all.

So the term “Loose Cannon” (loose cannon) indicates a subject in unwise group that can affect the safety of all or the success of an action. Similarly this term is used in various fields, from politics to poker.

A peaceful heart affront So the sniff test, bringing you back to a slight but decided alcoholic hint vaguely similar to that of certain spirits, within which is well harnessed a creamy fresh caramel note. A careful examination emerge herbaceous woody notes and a moist mixed forest scent to sweetish notes and slightly acidic.

But it’s time to drip with the Velocity of a fairly close range, than the atom has to offer in terms of airness. Obviously I applied the drip tip reducer. Otherwise I would have wisely opted for a Magma, with its unique inner time, able to worthily manage creamy notes, tabaccose, mixed dried fruit. Just what we expect to svapare us with Loose Cannon Cut the Rope.

I leave with three beautiful puffs decided and profonte, alternating with nasal exhalations aspirations. I enjoy great. Excellent mix of composure and creaminess. Now veiled alcoholic notes and easily distinguishable a woody, masculine walnut extract. Loose Cannon is warm, full-bodied. Alcoholic notes tickle the nose while the caramel amplifies, from shot to shot, the creamy appearance of this excellent liquid tobacco accompanied by a cunning use of brown sugar. A very fine taste manure annoying or invasive pernulla tells us, breath after breath, an interesting tobacco. Already tobacco! But as tobacco?

It is one of the n.e.t. (Naturally Extracted Tobacco) more available and widely used, because of its ability to bind with creamy bases and dried fruit in general. We meet him often we at The Flavourist and surely you too. It ‘s just stallatica notes and hay, in this particular variation, to allow me to distinguish. Other n.e.t. They have other features and express their aromatic power of other notes.

Loose Cannon, if vaped with generous shots, but all in all meditative and slow, could approach a cigar. The product family to which it belongs is that of modern tabaccosi. A generally more refined and credible than that proposed by the market in the past.

Try once and for all to focus on this type of “ingredients” has become increasingly popular in vape. Actually the n.e.t. They are used for years.

Basically it is of cold extraction (maceration) and a hot extraction (different) starting from mixtures of tobacco. I think the n.e.t. quite credible, but maybe with a lower quality than that proposed by some excellent our own brands. Loose Cannon proves to have an edge over other preparations, but the ingredient can not escape us.

The producers (mainly Americans) already decided years ago to make up their statements with caramels, flavoring tipicizzanti to Ruyan, fruit, creamy molecules, chocolate or red fruits and a significant range of spirits to try to realign the taste to the lost (in terms of flavor) due to overly aggressive filtering and abundant extractions. Often the alcohol smell present in liquids that contain n.e.t., in addition to simulate an aromatic structure, it serves to cover the smell of the solvents used during the phases of extraction or prior to maceration, in order (in this case) of drying the mixture choice. That’s one of many reasons why it is never clear of tobacco flavors. But I assure you that work.

But be careful. The boundary between a recipe that uses a n.e.t. and n.e.t. He caught and thrown in bowl to be sold as it is very thin. Some use n.e.t. to sell them as aroma to be telling the holders of a sophisticated and refined the production process, to offer an authentic taste of the tobacco. They are recognizable. Just have a little experience.

Loose Cannon by Rope Cut is a great product structured on caramel and dried fruit. A veil almost imperceptible vanilla supports the structure of the recipe tying worthily the caramel to tobacco flavour. It’s a credible tobacco vaping with great aromatic stability and taste not ruined by too sweet scents that nothing would have to do with what was promised by the mark. In the description the same, are not specified the types of tobacco used, but we focus on their characterization. Nuts and caramel cream, made very well at vape test. Nothing more. The amount of aromatic expedients undoubtedly fails to compensate for the lack of a high-quality raw material from the strong aromatic or emotional impact. Yet, the Loose Cannon fragrance is of great value, but only by understanding its nature we can judge him.

In conclusion, we can say that in every corner of the world are realized extractions and maceration of several products. You do it all along. Through ancient techniques or keeping up with the times. The difference is always in the perceived and ethics of those who follow and care throughout the entire production chain. Some are better than others, but a Rope Cut is recognized an unquestionable skill and sensitivity in the use of these ingredients. An unpublished certain recipe, but well made.

Loose Cannon in fact lends itself to long sessions of vaping as pulsing velvety puffs meditative accompaniment to a good rum from sufficiently warm notes.

One of the reasons why The Flavourist exists, in addition to our passion, is too. Getting experienced and analytical method, where the awareness of the consumer can not reach. Provide ideas for the tasting in a boundless world of tastes and aromas in which it is easy to get lost. We do our all.

Pro: A good use of the tobacco extract with creamy glazing and structural seal alcoholic a recipe from the heat and intense heart.

Contro: I would have made me more shading to the taste, emphasizing more incisively the walnut notes. I would have preferred more bitter and woody, but maybe, in their already something close range. We’ll see.